"The Pirates of Penzance" at the Ordway 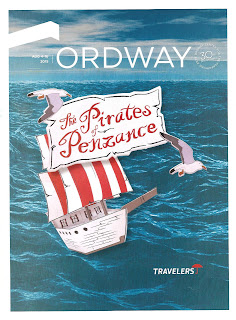 I interrupt this all-Fringe-all-the-time coverage to bring you some theater news that exists outside of the Fringe Festival. Yes it's true, there is non-fringey theater going on in early August, who knew? Last night the Ordway opened their boisterous and gorgeously sung and played production of my favorite Gilbert and Sullivan comedy operetta - The Pirates of Penzance. It's an absolutely delightful evening of music-theater, and don't worry, while Fringe ends this weekend these Pirates continue swashbuckling and singing through August 16. If you're a fan of comedy, fast singing, beautiful music performed by a huge and talented (and mostly local) cast and orchestra, swashbuckling pirates, and math, you don't want to miss this one! And since I've got  a 15-show weekend starting in a few hours, I'm going to get right down to it and tell you all the wonderful things about the show.


This is the Ordway's second original production this summer, after Damn Yankees, and I couldn't be happier about this trend. Next season includes local productions of The Sound of Music and A Chorus Line. It's fantastic to see our fabulous local talent up on the big stage, and The Pirates of Penzance is a great example of the gorgeousness that can be accomplished with this model of combining local talent with national talent and the highest production values. Long story short - go see it! Now if you'll excuse me, I'm off to Fringe!