Fringe Festival 2015: "We Do Every Show in the Fringe" 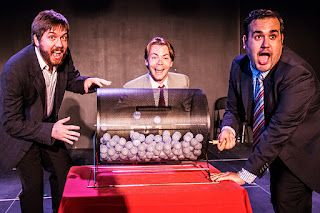 Title: We Do Every Show in the Fringe

Created by: The Performers of Fat Bottom Jones

Summary: Local improv comedy experts choose one of the 174 Fringe shows at random and perform it based on the photo and description.

Highlights: Last year it was called Four Humors Does Every Show in the Fringe, but despite the name change, it's the same performers and concept, which is a combination made for hilarity. Last night the ball chosen was Really Spicy Opera's The Clever Artifice of Harriet and Margaret, described as "Opera by women, about women, featuring nothing but women! Harriet and Margaret meet for tea... or do they? Hidden agendas and secrets lurk behind the rivals' smiles, while their inner voices reveal the truth." This all-male cast riffed on the idea of inner voices and the phrase "or do they," under the leadership of "director" Jason Ballweber who would occasionally interject to steer the show in a new direction. Brant Miller was Harriet and guest performer Andy Kraft was Margaret (or vice versa, they kept getting the names confused), while Nick Ryan and Matt Spring were the inner voices, standing just behind them and voicing their inner monologues (which, let's face it, we all have running at all times). Ryan Lear filled in all the other roles. At one point even the inner monologue had an inner monologue, and that inner monologue had an inner monologue, and that inner monologue had an inner monologue, which perhaps says something profound about the inner psyche, or else it's just silliness. This being an opera, there wasn't as much singing as I (or keyboard accompanist/sound effects man Nic Delcambre) would like, but at least we got a big closing number "Inside Paul's Brain" - yes, they eventually broke down and introduced a male character in this story about women. If you go you will not see this show, but something just as surprising and clever and laugh out loud funny.