"Take It With You" at The Underground 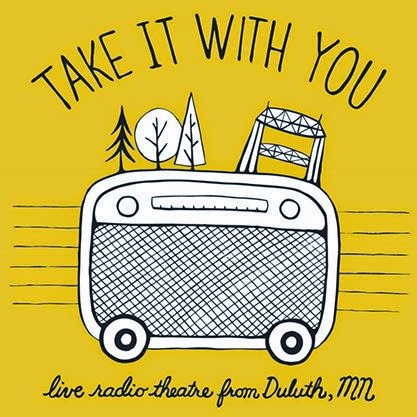 There's something cool going on in Duluth. I mean, there are lots of cool things going on in Duluth; it's one of Minnesota's top tourist destinations, with the lake and the big ships and all. But specifically on the music-theater front, which is what brings joy to my heart, there is something new and cool going on. It's called Take It With You and it's live radio theater, recorded monthly at The Underground in Duluth's historic Depot, and available for free online listening. This scripted serial radio program hearkens back to the days when people used to gather around their radios to listen to music and stories about their favorite characters. Now we can gather around our computers to listen, or plug into a podcast, as we follow this quirky cast of characters on their monthly adventures. It's described as "Cheers meets A Prairie Home Companion meets Austin City Limits," but I encourage you to give it a listen and see for yourself just how charming and funny and silly and musically delicious it is.

In the first 60-minute episode of Take It With You, we meet Blake (voiced by one of my favorite musicians Blake Thomas, check out his gorgeous and heartbreaking albums on iTunes), the owner of a bar and music club in Duluth, eager new employee and aspiring musician Andy (Frye, of Yellow Tree Theatre fame), disgruntled actress-turned-waitress Mary (Fox, another fave from Yellow Tree and other local stages), and oddball regulars Rick (the hilarious mutli-voiced Ryan Nelson), Bill (Robert Lee), and Zach (Stofer), with other wacky characters played by Katy Helbacka and Andy Bennett. Whether it's a bachelorette party or a stint in the local jail, these loveably kooky characters work their way through some situation each episode, while hanging out, chatting, promoting local businesses, getting advice from too cool for school "Steve and Jamie" and theoretical physicist "Ask Brooks," and of course, playing music.

Each episode features a half dozen or so of Blake's original songs, covers, or standards. Friends, I would drive 300 miles to listen to Blake sing one of his original songs. OK maybe that's a slight exaggeration, but I'm telling you, he's the real deal. He writes clever, whimsical, poetic, simple yet profound lyrics, accompanied by haunting or driving melodies, and sings in an authentic country voice. Add to that Mary's lovely harmonies and the whole group joining in on such standards as "Sitting on Top of the World," and you have some of the best music I would ever want to listen to.

But don't take my word for it; you can listen to episodes 1 and 2 online right now, just an hour each so it's not even a huge time commitment. I had the great privilege of watching the live recording of episode 5 this week, and as much fun as it is to listen to this show, it's even more fun to watch it in person with a sold-out crowd, and see the love and energy and joy that the cast brings to this unique creation that's both modern and charmingly traditional. Listen to the podcasts, like their Facebook page, and if you happen to be in Duluth the third Tuesday of the month, go see it in person!