"Golden Boys" at The Lab Theater 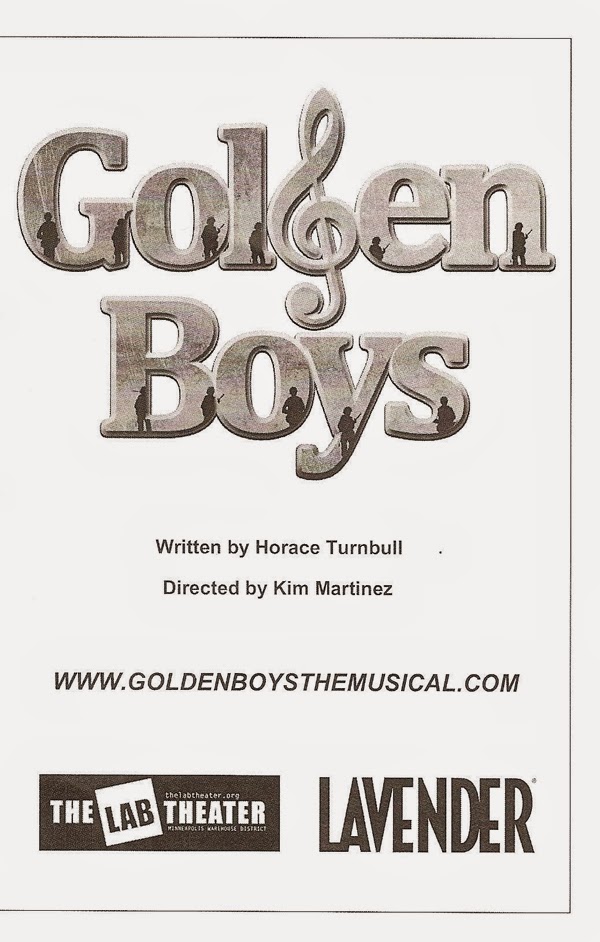 The new original musical Golden Boys, written by New York composer/playwright Horace Turnbull, tells the story of an integrated WWII army unit created to raise morale of troops and civilians by performing musical theater. I know, it sounds like something that was made up as a good story for a musical, but it's based on fact. The US Army created the Special Services in 1942 and set up a school at Fort Meade in Maryland to train officers and enlisted men in the art of entertainment. Golden Boys is a fictional story set in this world, focusing on one unit that rehearses and performs a musical in a US tour as well as overseas for the troupes. It's an ambitious project, covering issues of racism, the treatment of homosexuals in the military, and the camaraderie of people joining together for a common cause in the midst of war. The result is a bit unfocused and too long, but as this is the premiere, hopefully these issues can be worked out and the piece polished into a potentially great musical.

The story is told by Johnny, a man nearing 90 in the present day who tells his story to some unknown listener. The events unfold in flashback, with Johnny occasionally interjecting commentary (either in his period persona stepping right out of the scene, or as the old man, which is a bit confusing). Under the direction of Sergeant Buchanan, about a dozen enlisted men rehearse a musical called "Johnny Come Home," in which they play all parts, both men and women. Most of the men get a moment to tell their story in monologue, shining a light on the many different people who join the military and their diverse reasons for doing so. They go on tour, experiencing segregation in the south and racism in the army. Throughout the experience they form that familiar military bond, with the central relationship being that between Johnny, who plays the male lead in the musical, and Joshua, who plays the female lead Annette and falls in love with Johnny in real life as well as in the show. Familiar character types include the bad guy Baldwin who comes around only after a tragedy, the comic relief Carlos, and the wealthy playboy Rich. We come back to old man Johnny in the end, a nice bit of symmetry that ties up the story for all the guys we've come to know throughout the story.

The show-within-a-show concept, a musical theater staple, allows for many great musical numbers that have nothing to do with the plot, such as tap dancing in wet suits and flippers, and a mambo number complete with Chiquita Banana headdress. Most of the songs are fun and catchy, a few border on trite and cliche. The choreography by Jimmy Peters is fantastic, and these boys (most of whom are local talent) can dance! Highlights in the cast include Michael Fischetti as the stern but softhearted Sargeant, who is also a hoot as waitress Geena in the show; Scott Gilbert as our narrator Johnny, a likeable fellow whose story we want to follow; Bryan Gerber, who manages to create two compelling and sympathetic characters in gay soldier Joshua and lovestruck Annette; Aleutian Calabay as the tapping playboy; and Mark Anthony Hall with lovely vocals on a couple of solos as Ellis (conductor of the imaginary band, see below).

In my eyes there is only one unforgivable sin in musical theater, and that is the use of pre-recorded music instead of a live band. Unfortunately this production commits that sin. Canned music cheapens any musical and brings it down a level. Hopefully future productions will include live music; there's even mention of the band for the show-within-a-show, which would be a great opportunity to work a live orchestra into the show.

This production only has two more performances, so get to the Lab Theater fast to see these dancing and singing Golden Boys (discount tickets for Sunday's show available on Goldstar).