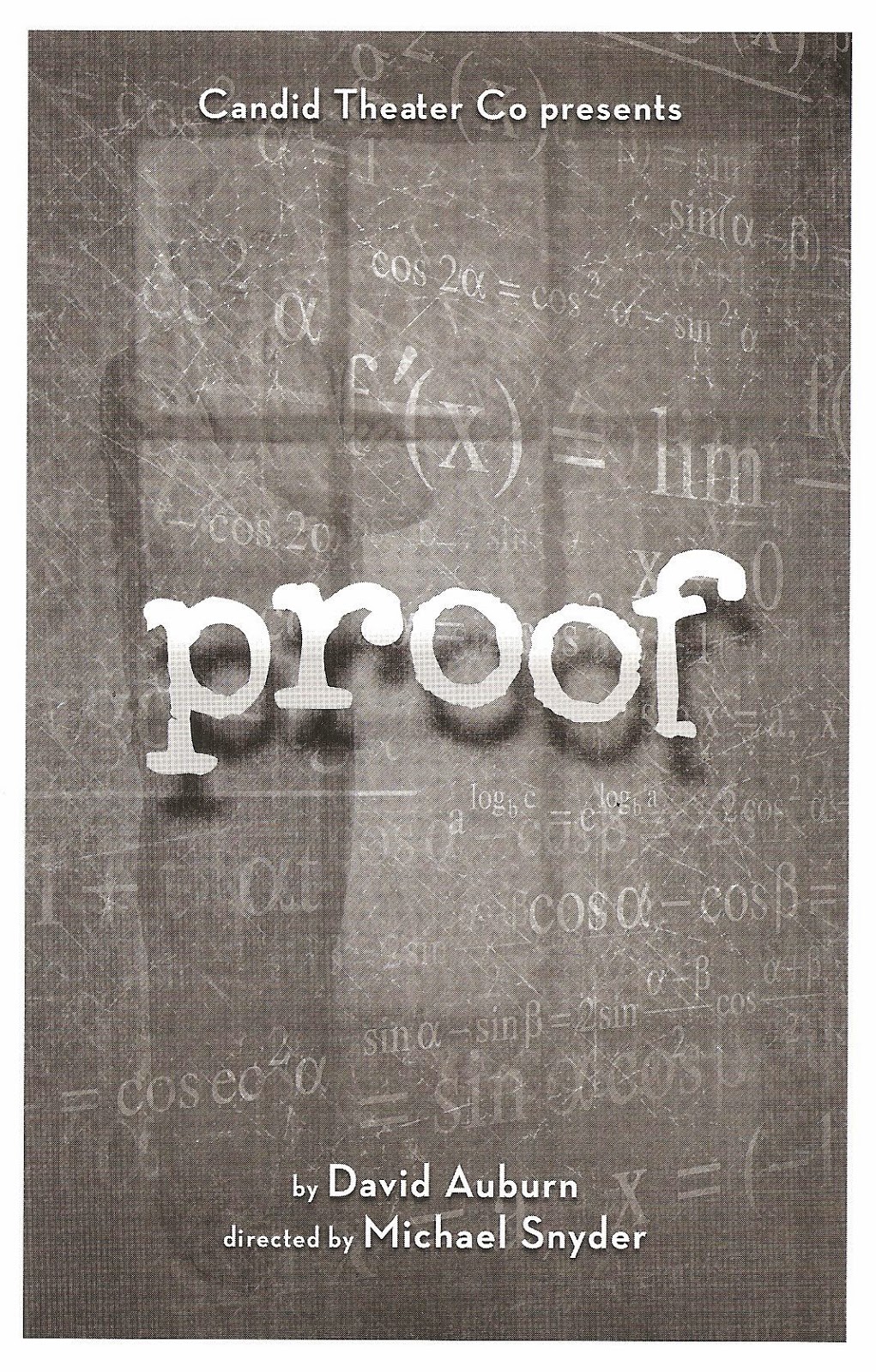 I like to refer to the 2001 Tony winner for best play Proof as my second* favorite math play (yes, I am a math geek in addition to being a theater geek). But of course it's not about math. Math is the language with which this very relatable story about family, identity, and mental illness is told. And even though I saw this play less than a year ago at Bloomington Civic Theatre, I welcomed the chance to spend more time with this complicated, dysfunctional, yet loving family. Candid Theater Company's production is nicely done in the intimate and sparsely decorated People's Center Theater on the U of M West Bank campus.

Proof tells the story of a young woman named Catherine whose father, a renowned mathematician, has just died. She took care of him in the final years of his life as his mental health deteriorated. In that time he filled 100 notebooks with gibberish, or is it mathematical genius? Similar to the movie A Beautiful Mind (based on the biography of mathematician Jon Nash), he sees patterns and codes everywhere, and it's difficult to decipher the difference between madness and genius. One of his former students, Hal, comes over to the house to go through the journals to see if there's anything of value. At the same time, Catherine's sister arrives from New York and tells her she's sold the house, and wants Catherine to move to New York with her. When Hal discovers one beautiful, complicated, ground-breaking proof, Catherine says that she wrote it. No one believes her since she's had little schooling; she dropped out of college to take care of her father. It's obvious she has inherited her father's mathematical skill, but has she also inherited his mental illness? That's the question that Catherine struggles with as she tries to figure out who she is without her crazy genius father to take care of and define her life.

Kendall Anne Thompson shines in the central role of Catherine. She beautifully, deeply, and physically conveys the complex emotions of Catherine, from the joy of discovery to deep loss and despair. The more I see of Kendall the more convinced I am that she's on her way to becoming a star of the Twin Cities theater scene (see also RENT). Steven Flamm is appropriately befuddled as Catherine's mentally ill father, seen in flashbacks and hallucinations. His final descent into his illness is devastating. Rounding out the cast are Katherine Prebel as Catherine's pragmatic, over-protective, and controlling sister, and Michael Terrell Brown as young mathematician Catherine falls for.

Proof is a great play, and you don't have to be a math nerd like me to enjoy it. But if you are, you'll learn some interesting facts about prime numbers and mathematician Sophie Germain, and enjoy a few inside jokes, like the one about a song called i. Proof continues through August 24 (discount tickets available on Goldstar).


*My favorite math play is Tom Stoppard's Arcadia, which I first saw almost 20 years ago in London, and haven't seen in over 10 years. Some local theater needs to produce this play soon!