The 2015 Ivey Awards at the State Theatre 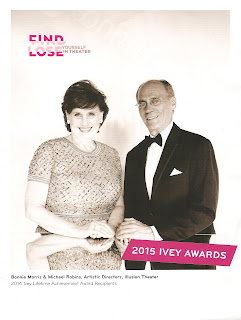 On Monday night I attended my 9th Ivey Awards. Yes, even before I started Cherry and Spoon in 2010 and started getting press tickets to the event in 2013, I was still a theater geek (read all the words I've written about the Iveys here). The Ivey Awards are my favorite theater night of the year, not so much for the awards themselves, but because it's a celebration of another year of amazing local theater that gathers all of my favorite theater artists in one room. Even though I've met many of them, I still get starstruck when I walk through the crowd and every other face I see is someone I've enjoyed watching on stage. I love to watch awards shows on TV so it's a thrill to get all glammed up and actually attend one in person. I even painted my toenails with a glittery green called "One Short Day" - appropriate because of its musical theater geekiness and and because this event that I look forward to all year goes by in a whirlwind of people and honorees and loud music and conversations. And now it's over for another year, but more great theater is still to come which we will be celebrating next year!

The super talented Christina Baldwin and Regina Marie Williams hosted this year's awards ceremony. They performed a funny and topical musical opening number, did bits and introductions throughout the show, and closed with Regina dressed as a nun (she's playing the Whoopi Goldberg role in Sister Act at the Chanhassen this fall) and Christina dressed as a WWII Army soldier from Sisters of Swing (get it - they're both sisters!). The awards were presented by past winners and representatives from the night's sponsors. In between awards we were treated to scenes from musicals and plays from the last year.

The Iveys don't have set categories and nominees, rather they award exceptional work wherever they see it. This year 11 awards were given out, representing 12 productions. I saw all but two of them - perhaps my highest percentage to date! And the winners are:
Every year Ivey honors an artist at the beginning of her or his career and one who is further into their career and has made many contributions to the local theater scene over a number of years. This year's Emerging Artist had already been honored as part of the cast of Marcus (my first thought was Nathan Barlow, but nope, maybe next year) - Mikell Sapp. I've seen him a couple of times on stage and definitely taken notice; I look forward to seeing more of him. In perhaps the only predictable award of the night, recently retired 20-year Artistic Director of the Guthrie Joe Dowling received the Lifetime Achievement Award. He was beautifully celebrated in a grand gala and performance earlier this year, and it was nice to once again celebrate his accomplishments over the last 20 years.

The performances are often the funnest part of the night. This year they included a pre-show warm-up by the beautiful, talented, and athletic young men of Mixed Blood Theatre's Colossal. We also got a brief history of the Iveys from the Church Basement Ladies (celebrating their 10th anniversary this year at Plymouth Playhouse). Next, a couple of past Emerging Artists performed. Ricardo Vázquez led the cast of History Theatre's River Road Boogie in Minnesota rock & roller Augie Garcia's appropriately titled big hit "Ivy League Baby" (Ricardo can currently be seen at Park Square in the moving and powerful portrait of a soldier, Elliot, A Soldier's Fugue). And in the most adorable moment of the night, Tyler Michaels and the cutest lost boys ever bounced around the stage singing "I Won't Grow Up," from Children's Theatre Company's delightful Peter Pan (watch Tyler take on another iconic role in Theater Latte Da's Sweeney Todd, opening at the Ritz this weekend). Not all the performances were musicals; we also saw a montage of scenes from four excellent plays - Jeffrey Hatcher's Hamlet (the playwright's latest work, the musical Glensheen, can be seen at History Theatre beginning next weekend), Thurgood (the previous two plays both presented at Illusion Theatre), Penumbra's Detroit '67, and Frank Theatre's Grounded (giving the audience a taste of why Shá Cage received the Ivey). The always sobering and poignant In Memoriam section was accompanied by a lovely song "We Are the Wandering Wondering" from the new original musical Jonah and the Whale by 7th House Theatre (who are presenting another new original musical at the Guthrie studio this winter). In what has come to be one of the most cleverly entertaining segments of the show, Shade's Brigade managed to work all of the sponsors into their radio drama. The disgruntled princess of Casting Spells' Disenchanted sang a (not so) happy tune, and the evening was brought to a delightful close with Ann Michels and the cast of Chanhassen Dinner Theatres' Mary Poppins singing and dancing their way through "Supercalifragilisticexpialodocious!" And then it was time for the party!

One of my favorite things in this past year is that I've gotten to know several of my fellow bloggers. We're a strange breed, and it's nice to know that other people understand the stress, obsession, and pure joy of being a theater blogger in this town. Last night I had such fun hanging out with Laura (One Girl Two Cities), Stephanie (phenoMNal twin cities), Julie (Minnesota Theater Love), Todd (l'etoile), and Kendra (Artfully Engaging) - check them out! I also had the great pleasure of chatting with many of my favorite theater artists, including but not limited to: Sally Wingert working the check-in at the pre-show party (see her as Mrs. Lovett in Theater Latte Da's Sweeney Todd opening this weekend); Kim Kivens handing out programs at the State (one of The Realish Housewives of Edina, opening at the New Century Theatre this weekend); Adam Qualls (with whom I geeked out about the new musical Glensheen that he's in, opening at History Theatre next weekend); Rachel Weber (whom I will see Dancing at Lughnasa at Yellow Tree tonight); Ivey winner Shá Cage (go see her powerful one-woman show U/G/L/Y at the Guthrie this weekend!); Sam Landman (who seems to have recovered well from his recent health scare); and the Nature people (who totally deserve an Ivey, be sure to catch one of the last two stops on their 2015 tour). There were more people I wanted to talk to but my feet were not getting along with my beautiful golden shoes, so my night had come to end shortly before midnight, just like Cinderella.

So there you have it. Another year of brilliant, funny, clever, challenging, strange, delightful theater, and another wonderful celebration of these beautiful cities we are lucky enough to call home. Were all of my favorite shows from this past year honored? Of course not, but you'll have to wait until my end of the year wrap-up in December for more on that. Until then - happy theater-going! 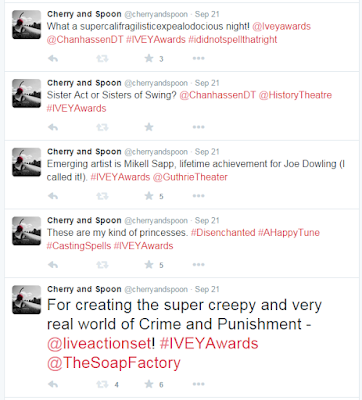 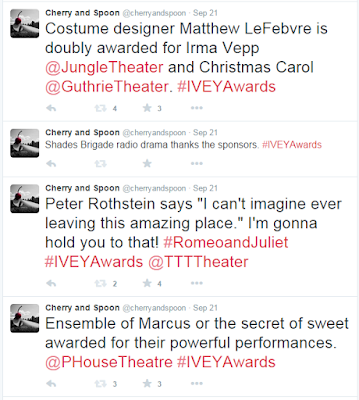 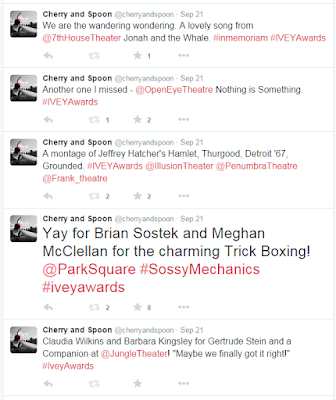 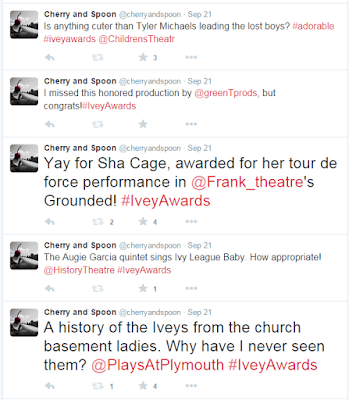 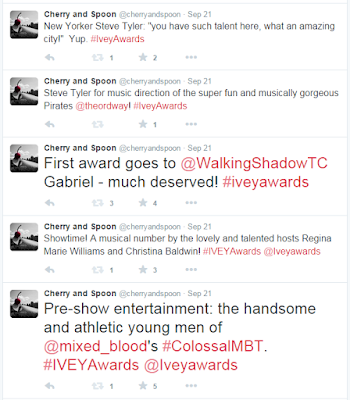