"The Little Pilot" by Sandbox Theatre at the Southern Theater 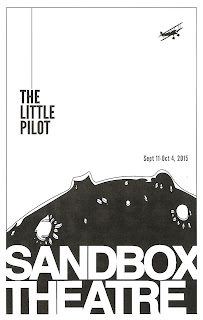 Even though this is only my 4th Sandbox Theatre show (a company that is celebrating their 10th anniversary), I know enough about them to expect the unexpected. Their work is highly inventive and unusual, combining many different artforms to tell a story in a unique way. Their newest work, an exploration of the life of famed French author and pilot Antoine de Saint-Exupéry (I'd never heard of him either), is no exception. Part adventure, part romance, part coming-of-age, part war experience, The Little Pilot tells this story in a non-linear way through theater, music, movement, aerial work, and video projections to create a strikingly lovely picture of a life.

As with most of their work, this piece was created by the ensemble, along with director Theo Langason and Project Leads Evelyn Digirolamo (aerial artist) and Kristina Fjellman (visual artist). Evelyn is joined in the ensemble by five other artists (Christian Bardin, Mark Benzel, Jonathon Dull, Katie Kaufmann, and Patrick Webster), each of whom play Antoine at some point in the play. Antoine's story is not told in a straight-forward way, rather we see snippets or memories of important moments in his life. His mother telling him a story, falling in love, flying in WWII. The actors playing him share several repeated hand gestures that tie their performances together. And they all take turns on the three aerial silks that are the only set pieces in the cavernous Southern Theater space. 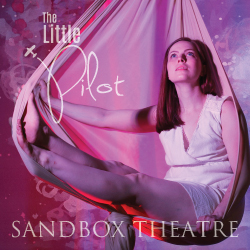 Stirring video projections of the earth and the cosmos are displayed on the aerial silks and the beautiful brick backdrop at the Southern. This is a highly physical performance, not just on the silks but also on the ground, as the ensemble creates some stunning images. The combined athleticism and grace of the aerial work is so thrilling to watch, and a perfectly fitting way to convey the life of a man who spent much of his life flying through the air.

It's difficult to describe Sandbox's work in general, and this piece in particular. If you're looking for theater that's out of the ordinary, that combines several different artforms, that pushes the boundaries, you'll definitely want to check out The Little Pilot, presented as part of the Southern's ArtShare program. Five more performances remain at the end of this month and early October, so get it on your calendar, and maybe check out what else is playing at the Southern (I also recommend the clever and hilarious Four Humor's Lolita: A Three Man Show).