"To Kill A Mockingbird" at the Guthrie Theater 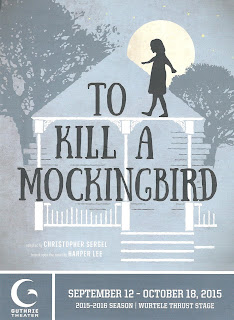 I don't ever want to read the recently published Go Set A Watchman, which reportedly paints a much less flattering, more complex, and perhaps more realistic portrait of the small-town Southern lawyer Atticus Finch. The Atticus Finch of Harper Lee's 1960 novel To Kill A Mockingbird and the 1990 stage adaptation by Christopher Sergel, now playing on the Guthrie's thrust stage, is just the best man. This is the Atticus I want to know, remember, and celebrate. The lawyer who believes in justice, equality, and fairness for every person, who is a loving yet strict father who raises his children to be smart and independent thinkers who use their own judgement to decide what's right and wrong, that's the Atticus that I, however naively, believe in. And that's the Atticus that it's a bittersweet joy to watch as his story comes to life on the Guthrie stage. Except of course that it's not really Atticus' story, it's his daughter Scout's story as she comes to see that her father and the town she lives in are not exactly what she thought they were. With the clear-eyed innocence and straight-forwardness of a child, she guides us through this story that is representative of a difficult and ugly time in our history, a time that isn't as long ago as we like to think. To Kill A Mockingbird is an American classic and this beautiful production does justice to it.

Even though it's been many years since I read the book or saw the 1962 movie starring Gregory Peck (so long that I had forgotten the ending), the story is familiar to anyone growing up in this country where it's required reading at most schools. In 1935 Alabama, a black man is accused of raping a white woman, and Atticus Finch defends him in court despite the bad will of most of the town against him and his family for defending a black man. All of this is reflected through the eyes of his daughter Scout who, along with older brother Jem and friend Dill, watch the proceedings with curiosity, fascination, confusion, and dismay.

I'm not sure I've ever seen three children command the Guthrie stage before like these three kids. There are two sets of the Scout/Jem/ Dill trio, and the ones I happened to see (Mary Bair, Noah Deets, and Isaac Leer) are a charming, precocious, and talented bunch. When they're not on stage alone for long scenes, they're going toe-to-toe with a cast full of beloved Guthrie veterans (of note, only one of the adults has never appeared at the Guthrie before). I am in awe of all three of them and what they're able to do at such a young age! I especially adore Mary Bair as Scout. If I had a daughter I'd want her to be just like Scout - smart, stubborn, curious, independent, brave, sensitive, open-hearted, unafraid to speak her mind and ask questions, and quick to defend herself and her family.

While these kids own this stage and this story, the adults aren't bad either. That one Guthrie newcomer I mentioned? That would be Baylen Thomas as Atticus, who perfectly embodies all of the wonderful characteristics that I described above, while still portraying the humanity of Atticus behind the icon. There are too many wonderfully strong performances in this cast to mention, but to name a few: Stacia Rice with a warm presence as the neighbor Miss Maudie who serves as a narrator, a clever device by the playwright that allows him to set the scene and include some of Harper Lee's language; Regina Marie Williams as the Finch's beloved housekeeper Calpurnia; Ansa Akya bringing depth and humanity to the accused man; Peter Thomson as the judge, in Mark Twain hair leaning back in his chair chomping on a cigar; T. Mychael Rambo leading a choir as Reverend Sykes; Ashley Rose Montondo, both sympathetic and infuriating as the accuser; and Bruce Bohne as her utterly despicable father.

As per usual at the Guthrie, the set, costume, lighting, and sound design make it easy to suspend disbelief and feel like we're in a small Southern town a century ago. The thrust stage is covered with a worn wooden floor, surrounded by three front porches and one rope swing. The jailhouse is lowered from the ceiling, and the inside of the courtroom comes up from below for that crucial scene that spans the intermission. Lived-in period costumes complete the look (set and costumes by James Youmans and Matthew J. LeFebvre).

I found this to be a really lovely evening at the theater, one that left me with tears in my eyes, a warmth in my heart, and a feeling of injustice, not so much at Tom Robinson's fate (because really, what other ending could there be in the deep South of the 1930s), but that Tom Robinson's story continues to be repeated today. To Kill A Mockingbird is a classic piece of American literature, one that's timely and relevant despite being set 80 years in the past, and this beautiful production and excellent cast of young and old alike bring it to life in an entirely satisfying way. (Continuing through October 18.)