"Things of Dry Hours" by Frank Theatre at the Playwrights' Center 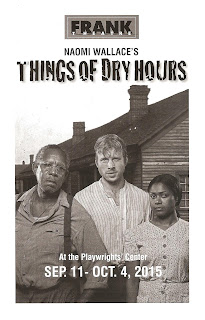 Playwright Naomi Wallace's One Flea Spare, staged by Theater Coup d'Etat, was one of my favorite theater experiences last year. So I was eager to see more of her work in Frank Theatre's production of Things of Dry Hours. Frank always does interesting, thoughtful, meaningful work, and this one is no exception. Dealing with communism, racism, and sexism in 1930s Alabama, Things of Dry Hours doesn't on the surface bear much resemblance to One Flea Spare, set in plague-ridden 17th Century London. But it's another dense, poetic, and thought-provoking piece by this playwright and this company.

Tice Hogan is a communist in 1932 Birmingham, one of the few places in that time and city where black and white people could come together as equals. He tells us in the opening monologue that he owns two books - a big Bible, and The Communist Manifesto, a slim volume but just as important to him. But being a member of the party could also get him in trouble with the local mining company, so when an unknown white man comes knocking at the door of the house he shares with his daughter Cali, saying the party sent him, he's suspicious. Corbin was fired from the mine and hit the man who fired him with a steel pipe, probably killing him. He gives Tice the name of a mutual friend who says that he could shelter him. Tice reluctantly agrees to let him stay for one week until things cool down, and eventually begins to teach him about communism. Cali gives him porridge in the morning and soup in the evening, but Corbin wants more from her, first a kind word, then a kiss. Cali takes a shine to him too, but knows that nothing good can come of that.

There's a lot going on in this play. The idea of communism and the struggle of the working people to be treated fairly, the extreme and overt racism of 1932 Alabama, and gender inequality. I found the most powerful of these to be Cali's stories about life as a poor black woman who earns a living doing laundry for rich white people, gathering bits and pieces of their lives where she can. She's able to briefly turn that power dynamic on its head in a bit of play-acting with Corbin, so perhaps just for a brief moment he can understand what it's like to be her.

Director Wendy Knox and her three-person cast do a great job bringing this complicated story and layered characters to life, including Hope Cervantes as Cali, Sam Bardwell as Corbin, and Warren C. Bowles, stepping into the role of Tice just the day before the first preview. Other than the fact that he relies on the script in a few scenes, there's no sign of this last-minute change, the three actors work together well. John Beuche has created a simple and lifelike set for them to play on, with a raised wooden floor representing the living space of the cabin with runways leading to it from either side, and bare trees in the space outside the cabin. Completing the scene is the wonderful soundtrack of what I like to call old-timey music playing before the show and at intermission (sound design by Dan Dukich).

If I hadn't read it ahead of time, I'm not sure I would have known Things of Dry Hours was written by the same playwright as One Flea Spare. I don't see a lot of of similarities, other than obscure titles and a strangely poetic analogy that ties the story together. In One Flea Spare it's water on stone, in Things of Dry Hours it's an apple (which I admit I didn't completely get, it would require a bit more contemplation on a better night's sleep). But it's a fascinating and well-done story that's worth the effort (continuing at the Playwrights' Center through October 4).