"The Realish Housewives of Edina" at New Century Theatre 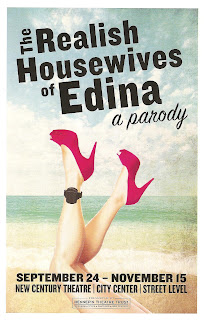 I have not watched a single minute of a single episode of any of Bravo's popular Real Housewives TV series (Wikipedia tells me there are seven series, five of which still in production). Don't get me wrong, I love my reality TV, but more of the competition variety (Survivor, The Amazing Race, Top Chef, American Idol). I don't quite understand the fascination of watching "celebrities" in their daily lives, but there's no doubt it's a hugely popular phenomenon, and one that's ripe for parody. So it's a perfect time for this outrageous comedy by playwrights Kate James and Tim Sniffen of The Second City comedy machine. Their intention is for The Realish Housewives of X to play at regional theaters around the country, with slight tweaking for each location. Their first location - Edina. With a fabulous local cast, this show is a hilarious parody of the reality TV phenomenon.

New Century's wide and shallow stage (which can sometimes feel awkward) is a perfect fit for the preview show of the newest series of the Real Housewives-esque show, with cabaret tables in the audience adding to the fun and informal atmosphere. Host and creator Randy (Adan Varela, who also plays multiple other characters) introduces us to each of the housewives (curiously, only two of them have husbands). Ravonka (Kim Kivens) is the vaguely European royalty who carries her tiny dog around in her purse, demands that everyone "pay attention to me right now," and never sees her Baron husband. Claudia-Louise, aka CL (Quinn Shadko), has the perfect family and isn't afraid to tell everyone so. Gwen (Katherine Kupiecki) is an incarcerated politician trying to redeem her image with the public. Ditzy Desiree (Karissa Lade) is a fro yo addict and neck model. Brooke (Anna Hickey) is the newest member of the group, a self-made business woman who has made a fortune selling clothing with writing on the butt. Some of the other members of the group don't accept her "new money" so easily, causing the necessary tension for a show like this.

Randy prompts the women to talk about their feelings as he shows them clips from the season, which are acted out in front of us. We see the women visit each others' work places, attend various charity events, and gossip with and about each other. There's a bit of audience participation as CL's husband and Ravonka's daughter are picked out of the crowd and played off of. Everyone in this cast is so loose and playful, yet precise in the characterization of their stereotypical housewife type, I imagine it will only become more fun to watch them play with the audience as the 8-week run continues. Each of these women (and Adan) is a hoot, but Kim Kivens as Ravonka is hysterical. Anyone who's seen her Michelle Bachmann impersonation knows how great she is at these over-the-top caricatures, completely committed with every look and gesture, but here she is absolutely Ravonkulous (meaning ridiculous and fabulous and any other -ulous word that might apply).

The creators have worked with locals to throw in plenty of Minnesota references, and we love that! From Zumbrota to Spalon Montage to the Galleria, these housewives hit all the local hot spots. Not to judge a book by its fashionable cover, but the opening night crowd seemed to include many "real housewives" types, leaving their husbands and kids at home for a night on the town. In fact, the show could be a brisk 90 minutes if they cut out the intermission, but then they wouldn't sell as many drinks to this crowd that seems intent on having a good time.

The Real Housewives franchise is an easy one to parody. OK I've never seen it, but it seems like there is plenty of fodder for comedy. It's pretty much a slam dunk, especially when played to a crowd that is obviously hungry for it, and this play delivers on that expectation. Funny, ridiculous, over-the-top, and with a cast that gleefully milks every moment. Playing through November 15 at the New Century Theatre in downtown Minneapolis, grab your best girl and guy friends, a few drinks, and settle in for some easy laughs.