"The Explorers Club" at Lyric Arts 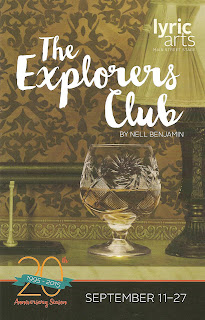 "To Science!" Such is the rallying cry of the fictional Explorers Club in the new play by Nell Benjamin (co-writer of the musical Legally Blonde). But it's not just fiction; the real-life Explorers Club is an organization founded in 1904 and still going strong, a group of scientists committed to "the scientific exploration of land, sea, air, and space." The play is a riff on this idea, taking it to farcical extremes and exploring what happens when one of the members dares to propose that a woman join the group. The result is a silly, witty, and fun play well executed by Lyric Arts with a strong cast and fantastically detailed set design. Not a bad way to open the season!

I doubt that the real members of the Explorers Club are as ridiculous as their fictional counterparts. Explorer Percy (Peter Ooley) insists that he has discovered the "East Pole," botanist Lucius (Brandon Osero) grows poisonous plants named after the women he loves because he's afraid to tell her how he feels, Professor Sloane (Leigh Webber) is intent on finding The Lost Tribes, and Professors Walling (Grif Sadow) and Cope (Robert Zalazar) are so affectionate with their animal subjects that they've lost any scientific objectivity. Into their midst comes Phyllida Spotte-Hume (Jessica Scott), discoverer of a lost city and the object of Lucius' affections. The other members of the club are aghast at the idea of a woman joining their ranks, thinking she'll be too distracting to their work (reminiscent of the #iammorethanadistraction movement against school dress codes). But she also brings excitement and adventure in the form of the native Luigi (a highly physical and newt-like performance by Brendan Veerman) who unwittingly offends the queen, bringing Sir Humphries (Warren Sampson) and the British Army to the Club's door. Along with Irish assassins and killer monks, they create quite a ruckus. It's quite a far-fetched and ridiculous situation, but it's all in good fun!

The other star of the show is the set (designed by Brian Proball) and props (Emma Davis et al.) that look like they came right out of the Librarian movies. The set (dominated by a huge set of doors, stairway to the second floor, and a bar) is chock-full of authentic-looking artifacts including a mummy's case, a full suit of armor, shrunken heads, a large plant that grows, a giant rhino head, elephant leg stools, and weapons of every sort. All of the elements come together smoothly and with great comedic timing under the direction of Matt McNabb, highlighted by some thrilling and intricate drink choreography that is flawlessly performed by the cast (one wonders how long they had to practice catching those drinks, and if they use their new found skill to impress their friends at parties).

The Explorers Club is all light and fun silliness, a strong start to Lyric Arts' 20th anniversary season that includes, among others, A Laura Ingalls Wilder Christmas (a must-see for LIW fanatics like myself), the small and quirky musical The 25th Annual Spelling Bee, the huge and boisterous musical Shrek, and the classic comedy The Odd Couple. The Explorers Club continues through September 27 at Lyric Arts Main Street Stage in Anoka (discount tickets available on Goldstar). So raise a glass to science, comedy, and theater!