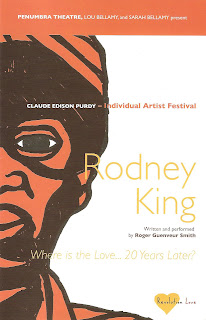 "Can we all get along?" This famous plea uttered by Rodney King during the 1992 L.A. Riots, a reaction to the acquittal of the four LAPD officers who severely beat him a year earlier, is often what he's most remembered for. I admit that after more than 20 years, I had forgotten many of the details, and didn't even realize that he died three years ago. But in this one-man show written and performed by Roger Guenveur Smith, Rodney King's story comes alive again - the good, the bad, and the ugly. It's a virtuoso performance that is poetic and lyrical, harsh and disturbing. Roger has performed this piece around the world and has brought it to St. Paul's Penumbra Theatre for just two weeks. It's definitely something to see.

Roger doesn't tell Rodney's story in a linear fashion, but rather in an impressionistic sort of way. Standing barefoot on a bare stage in the middle of a square of light, speaking into a hand-held microphone with a long cord, and using a combination of poetry, spoken word, rhythm and rhyme, repeated phrases, singing, rapping, and an intensely felt physicality, he makes this a visceral experience for the audience. In just over an hour, we travel with him to that fateful night when police officers struck Rodney 56 times with a baton, that just happened to be caught on videotape by someone in a nearby apartment. Then we're right in the middle of the riots as Roger tells the brutal and heart-breaking stories of just a few of the 53 people who were killed. He ends the show with Rodney's famous "can we all get along speech," beautifully delivered. This show is completely engaging and you feel like you're right there in the midst of the violence, which is not a comfortable place to be.

Rodney King is one of those pieces that transcends theater and becomes a vital part of the world we live in. It will challenge you, it will make you rethink your opinions, it will anger you that 20 years later this is still happening and we're still struggling to find a way to get along. In an ironic bit of theater scheduling, this week I watched the fictional story of the conviction of a black man in 1930s Alabama for a crime he didn't commit, and the true story of the acquittal of police officers for severely beating a black man in 1990s L.A. It's been a sobering week.

If you can get to Penumbra in the next two weeks, I highly recommend you spend an hour remembering Rodney King. Partly for the importance and relevance of the story, and also to witness Roger Guenveur Smith's masterful performance of this artfully constructed and utterly captivating piece of theater. I think the super-talented Dennis Spears, who happened to be sitting behind me, said it best. As the theater went dark and Roger left the stage, he uttered a simple two-syllable "damn." That pretty much says it all.