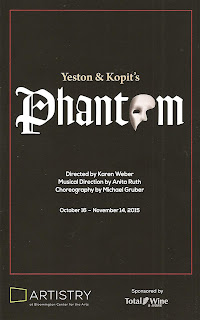 There's a new Phantom in town. OK it's not exactly a new Phantom, but rather one that's lived under the shadow of the musical theater juggernaut that is Andrew Lloyd Webber's The Phantom of the Opera, the longest running show on Broadway and "the most financially successful entertainment event to date." What hope, then, does any other musical adaptation of the early 20th Century French novel have? Maury Yeston and Arthur Kopit (who also wrote the 1982 Tony-winning Best Musical Nine) had already begun their musical adaptation when Webber's premiered in 1986 and took over the world. Consequently, Yeston and Kopit's version never made it to Broadway, but it has had many productions around the world, and now, in Bloomington MN at the newly renamed Artistry. Not being a huge fan of Webber's version (read more about that here), I was curious to see what another version might look like. While it's still not my favorite story, I found Artistry's production of this different sort of Phantom to be lovely, touching, and well performed by the cast and orchestra.

This Phantom follows the same general outline as the book and other adaptations, although they all differ on the details. The general outline: a disfigured man haunts the Paris Opera House, he falls in love with and kidnaps the beautiful young opera singer Christine, and tragic things happen. The details: in this version, the Phantom, aka Erik, has lived below the Opera House all of his life, having grown up there after his mother dies. He tutors Christine in opera technique, and only kidnaps her to save her from the diva who's trying to sabotage her. She seems to genuinely love him, but alas, they can't be happy together, because this is still Phantom.

I've only seen ALW's Phantom once, and I found it to be a bit difficult to follow, slow and draggy in parts, and way too melodramatic. This Phantom doesn't have those problems. It's still a preposterous story (why does someone who basically grew up in a sewer and rarely appears in public go about dressed in pristine tails and a fancy cape?), but Erik's origin story explains more of why is he the way he is, the show moves along with a fairly good momentum, and while it's still dramatic, it's a bit sweeter and with some lighter moments.

Yeston's score is lovely and melodic, with the duet "You Are Music" a highlight. As per usual, Anita Ruth's 20-piece pit orchestra plays it wonderfully, and the cast is full of strong singers. Courtney Groves is radiant as the young Christine, and has a sweet and lovely voice. William Guilness brings great dark and conflicted emotion in his portrayal and his strong deep voice. She's all lightness, and he's all darkness (which I guess is the point of the piece), and they sound beautiful together. Other highlights in the large and talented ensemble are Riley McNutt as Christine's patron, Alan Sorenson as Erik's friend with a secret of his own, and Carl Schoenborn and Angela Walberg as the new owners of the Opera House, the latter adding humor with her diva-like scheming.

One of the main focuses of that other Phantom is the huge chandelier that almost drops on the audience. While there is a dropping chandelier here, it's less of a spectacle, but still impressive, as is the set. The massive two-story structure with movable steps, multiple doors and entrances, and surprising nooks and crannies may be the most elaborate I've seen on the Artistry stage. It doesn't overpower the story but provides the appropriate grandeur for the Opera House (set design by Benjamin Olsen). Ed Gleeman's luscious costumes complete the look of Paris high society.