"The Phantom of the Opera" at the Orpheum Theatre 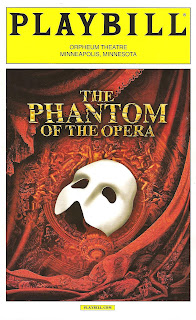 Before this week, I'd never seen "the most popular musical of all time," Andrew Lloyd Webber's The Phantom of the Opera (it's the longest running show in Broadway history and has the largest worldwide gross of any musical). I was strangely proud of this; to me Phantom represents everything I don't like about musical theater - over-the-top, melodramatic, set-heavy and plot-light. But I decided I should see it at least once to prove my assumptions right or wrong. I'm glad I saw it and it was quite a sight to see, but in short, it was pretty much as I expected. A lavish spectacle of a production with amazing sets and costumes (and yes, the famous chandelier doing tricks), a little hard to follow, a little slow and draggy in parts, but with some beautiful musical moments.

If you have seen Phantom before, this show will be new to you; it's a new production of the 27-year-old musical about an angry disfigured man who haunts an opera house and falls in love with an ingenue, making her a star, but at a terrible cost. But since I've never seen the show before, I can't speak to what has changed, only what I saw. So let's break it down:

The good:
The bad:
The ugly:

If you're someone who loves The Phantom of the Opera, go see this new production, I'd love to hear how it compares. It is a beautiful lavish production, and a spectacle for sure. But that's not what musical theater is to me (my kind of musical theater is this, and this, and this), although judging by it's popularity, I'm in the minority!  The Phantom continues to haunt the Orpheum Theatre in downtown Minneapolis through January 5.