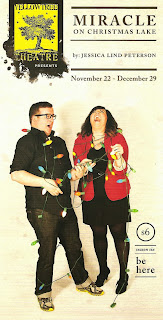 Miracle on Christmas Lake is not your typical holiday classic. Instead of figgy pudding, sleigh rides, and angels, you get lost lizards, moon boots, and tater tot hot dish. And yet it deservedly has become a classic. This Yellow Tree Theatre play written quickly out of desperation is returning for its fourth year, and it's one of their most popular shows of the season and has even inspired a sequel. It's not really a surprise - the show is quirky and funny and a little outrageous, but at its heart it's about friends and family working together to create something they believe in and that enriches their community (not unlike Yellow Tree Theatre itself). What better way to celebrate the holiday season? Yellow Tree co-founder Jessica Lind Peterson wrote the play for their first season five years ago and directs for the first time this year. There are more than a few auto-biographical elements in the play, along with a bunch of ridiculous (but true) Minnesota stereotypes. Even though this is my fourth time visiting Christmas Lake (my second time seeing the original, and I also saw the sequel twice), it never fails to delight and entertain.

Quick plot summary (it's delightfully preposterous, so hang in there): Colin's father has died and left him a theater in the small Minnesota town of Christmas Lake (think snowcats and lutefisk and church basements). He has returned to his hometown with his wife Tess after leaving New York City and his successful career as a soap opera actor.* At the last minute, the rights to their annual Christmas show, It's a Wonderful Life, are pulled, forcing them to come up with a new production in a short amount of time (this really happened to Yellow Tree, which was the genesis of this show). The only actors they can get are the moon boot-wearing lizard-loving massage therapist Martha and the Little House on the Prairie-obsessed piano tuner Neil. They decide to stage a Christmas episode of Colin's soap As Time Ticks By (fun fact: Yellow Tree co-founder Jason Peterson had a small role in my favorite soap-that-is-no-longer, As the World Turns) to appeal to their greatest benefactor Mrs. Burlington. She's a big fan of the soap and Colin, and agrees to play a role in the show. Opening night arrives and everything falls apart, but in a so-bad-it's-good Producers sort of way. The show is a hit, the theater is saved, and Colin and Tess decide to stay in Christmas Lake and build the theater and their lives in this quirky little town they've come to love.

Some of my favorite things about Christmas Lake:

One thing I don't like about Christmas Lake:
If you've never paid a visit to Christmas Lake, I highly recommend it as a silly and sweet new holiday classic. And even if you've been there several times, there's always something new to experience (playing now through December 29).