"Or," at Park Square Theatre 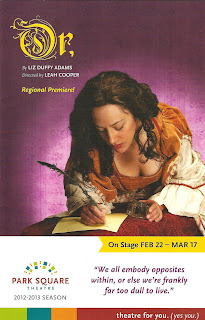 Or, What a curious title - O-r-comma. Before seeing the regional premiere of this new play by Liz Duffy Adams at Park Square Theatre, I was on board with the concept - a comedy about England's first female playwright - but I couldn't quite figure out how the title fit into that. Fortunately, the play begins with a delightful prologue delivered by its star, the also delightful Emily Gunyou Halaas, explaining the title. Or, is an exploration of opposites, dualities, and the idea that those opposites can coexist. "We all embody opposites within, or else we're frankly too dull to live."

The play is a fictionalized account of real people in late 17th century England - playwright and former spy Aphra Behn, King of England and theater supporter Charles II, and his mistress, the actress Nell Gwyn. This is not the first play I've seen about these characters; last year's Compleat Female Stage Beauty by Walking Shadow also featured Charles II and Nell Gwyn, but focused more on the consequences of Charles allowing women on the stage to play female roles formerly played by young men. But while that play is a pretty dramatic and deep, Or, is pure comedy fluff written in the style of Restoration Comedy, which Wikipedia tells me is "notorious for its sexual explicitness." There certainly is a lot of that in the play, as the three main characters form a relationship that could be called a polyamorous* triad (thank you Shonda Rhimes) - a true love triangle. Charles is Aphra's "keeper," Aphra and Nell are lovers, and then Charles meets Nell. The three live happily ... well, at least for the moment.

The most fun part of this play is that two of the three actors play three characters each, often in quick succession, exiting one door as one character and moments later entering another door as a different character with a different costume and accent. I bet the backstage view of this play is just as entertaining as the view from the audience. Mo Perry is an absolute scene stealer with all of her characters - the carefree Nell, the stern theater owner Lady Davenant, and especially the loyal servant Maria. Matt Guidry is also great as the powerful and fun-loving king, quickly changing to Aphra's former lover and current spy William Scot, on the run and hiding out in Aphra's room. The one constant through this revolving door of characters is Emily Gunyou Halaas as our heroine-spy-poet Aphra. I always enjoy seeing Emily on stage because of her emotional investment in her characters and the way the scripted words come out of her mouth (she was most recently seen in the wonderful In the Next Room at the Jungle, one of those "or" plays). Her Aphra is smart and strong, poetic (often speaking in rhyme) and pleasure-loving.

The period costumes by Annie Cady are gorgeous, from Nell's smart and boyish pants, to the king's beautiful coat, to Aphra's elaborate dresses. The set by Michael Hoover is simple, spacious, and elegant, with plenty of doors for the actors to disappear behind and make their quick change. Also adding to the period feel is the music played before the show and during scene changes - a sort of chamber music arrangement of Beatles songs.

All in all I found Or, to be very enjoyable. I'm not sure that all of the complexities of plot work, but it's a very fun piece with a great cast, nicely directed by Leah Cooper. A play written by a woman, directed by a woman, and starring a woman is definitely something I can support, especially when it's this good.

Or, from Park Square Theatre on Vimeo.


*See also this recent episode of Our America with Lisa Ling.