"Kingdom Undone" by Theater for the Thirsty at Southern Theater 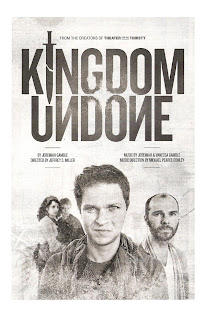 Kingdom Undone is a new passion play - a dramatization of the life and death of Jesus of Nazareth, the pivotal event in the Christian tradition. It's a familiar story to those of us who grew up in the tradition (and a timely one, as many are celebrating Easter this weekend). Kingdom Undone stays true to that tradition, but this new adaptation by Jeremiah Gamble feels fresh and modern, with moments of humor, music (written by husband and wife team Jeremiah and Vanessa Gamble, aka Theater for the Thirsty), and a lighter touch, despite the obvious darkness in the story. I found it to be entertaining and well done; it moved even this neo-Pagan-Unitarian-Universalist-Yogi. It's a powerful story; there's a reason that it has moved many over the centuries and inspired a movement. It's also a story that has been contorted, abused, and used, but when it serves to inspire, uplift, and perhaps help one to be a better and kinder person, that's when the story is at its best.

When I saw the promotional materials for Kingdom Undone (it premiered last year, with the current remount ending this weekend), I assumed that the central figure in the image was Jesus. Not so, it's Dustin Bronson's very charismatic and sympathetic Judas, infamous as the man who betrayed his teacher for 40 pieces of silver. This play, in a way, is the story of Judas and his relationship with Jesus and his teachings. Unfortunately he has a very literal interpretation of Jesus' stories about the coming of a kingdom. One wishes someone would play the part of Nabalungi's friend in that other great theater piece about faith, The Book of Mormon, who tells her "it's a metaphor, we're not really going to Salt Lake City." But Judas believes that Jesus will literally call down armies of angels to overthrow the Romans, and thinks that he's playing his part in the plan when he turns Jesus over to be tried, and eventually crucified. He's devastated when he realizes that this is no political game.

Highlights of the show include:
Kingdom Undone is a well-done new adaptation of a familiar story, one that's well-acted, colorful, musical, and uplifting.