"Grease" at the Chanhassen Dinner Theatres 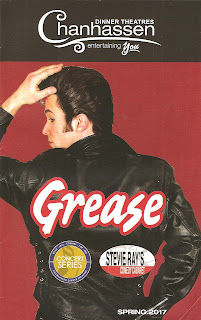 Friends, I am here to tell you that in the southwest suburb of Chanhassen, Grease is most definitely the word of the summer. And yes, it may be 20 degrees with below zero wind chills and late winter snowstorms in this upside down weather world we now live in, but Grease is here to take you into spring, through summer, and even into early fall with a super high energy, gorgeously cast, supremely fun show. There's nothing subtle about this production that goes for big performances, big high notes, and big laughs. Grease is a guaranteed crowd-pleasing seat-filler, but the Chan doesn't just rest on the easy nostalgia of the piece. Instead, they've put in every effort to make this production the best it can possibly be.* It's very likely to sell well for them for the next seven months (who doesn't love Grease?), and it deserves to because it's pretty much the most fun you can have in a theater.

If you're only familiar with the movie, the stage version (which came first, as it usually does) is a little different. The songs are slightly rearranged, a few minor plot points differ, and Sandy is not from Australia. However, this production does include two of the songs written for the movie - "Hopelessly Devoted" and "You're the One That I Want." We follow this loveable band of misfit teenagers as they try to fit in, find love and friendship, and figure out who they are and what they want in life, just like we all did (and do). Yes the show is a little dated; I wish there weren't so many (or any) fat jokes, or bullying jokes, and the phrase "did she put up a fight" and jokes about putting pills in a girl's drink are problematic in the post-Bill Cosby era. But perhaps the possibly un-feminist ending is less about Sandy changing who she is to win a guy and more about allowing herself to be more than what society and her parents expect her to be. It is almost the 1960s after all, and the 1950s "Sandra Dee" persona is a limiting and unachievable ideal. Grease was written in the early '70s looking back on 1959, and perhaps Sandy represents the transition between the 1950s ideal of womanhood to the freedoms begun to be achieved by women during the sexual revolution and women's liberation movements of the '60s. It's clear that in the final song, Sandy is in charge, and Danny, who has also tried to change for Sandy, "better shape up" and be worthy of Sandy, full of newfound strength and confidence.

Every single member of this 20-person cast (which by the way includes two married couples) is a star in their own right, down to the swings Serena Brook (a regular on A Prairie Home Companion with Chris Thile) and Jordon Oxborough (who was a thoroughly charming Danny himself in Lyric Arts' production of Grease a few years ago). And the wonderful thing about Grease, that I found lacking in last fall's Camelot, is that everyone in the ensemble has their song to sing, their joke to tell, their moment to shine. There's always deep talent in the Chanhassen ensembles, but in this show we actually get to see and enjoy and cheer for them all. And so I will:


The Chanhassen's resident design team has once again outdone themselves, from Rich Hamson's period costumes that give each character a distinct personality (with the Teen Angel's silver sparkly suit with wings as the piece de resistance), to Paul Bigot's further character-defining wigs, to Nayna Ramey's colorful multi-level '50s drive-in set with larger than life photos of real '50s pop icons (and of course, a drivable car!), to Sue Ellen Berger's lighting design that, among other things, highlights said photos in appropriate scenes. Tamara Kangas Erickson's fantastic choreography is '50s yet fresh, and the cast performs it with youthful energy and charm. With the Chanhassen's usual music director Andrew Cooke's recent departure from the Twin Cities, Richard Long ably takes up the baton directing the fabulous onstage band.

Sometimes musicals can feel too long, especially those that start at 8 pm after a full meal and a couple of drinks and include a long intermission. Grease is not one of them. The show flies by in just over two hours with Michael Brindisi's quickly paced direction, and when it's over you'll wish it weren't! Fortunately they tack on a post-curtain call performance of the title song, which only appears over the credits of the movie. It's a fun way to hold onto the show a little longer and go out into the cold night warmed by the experience.

Grease continues through October 28, so there's really no reason not to get yourself out to Chanhassen sometime in the next seven months to be transported back to the '50s and enjoy a fun, high energy, fantastically performed classic.


*Edited to add: there is one thing that could make this production better, and that is a more diverse and inclusive cast that better represents the world we live in.