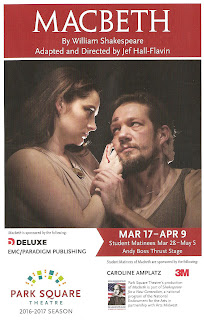 Macbeth. There I said it. In addition to being one of Shakespeare's darkest, bloodiest, and most violent plays, Macbeth has also inspired a silly theater superstition in which it's bad luck to say the name in a theater. But it's certainly not bad luck to produce it, also being one of Shakespeare's most popular plays. Wikipedia tells me that "it dramatizes the damaging physical and psychological effects of political ambition on those who seek power for its own sake." Which is something we still see examples of today. While it's not as bloody good fun as I remember the Guthrie's 2010 production being (one of my favorites of that year), Park Square Theatre's Macbeth is intense, intimate, and striking.

Director Jef Hall-Flavin has adapted the play to use just nine actors in three times as many roles, telling the story in a brisk 90 minutes no intermission. If you attend one of the weekday student matinees, that is. For evening and weekend performances (i.e., for grown-ups), they've added an unnecessary 20-minute intermission, which only serves to interrupt the momentum of the ever building tension and violence.

The cast is led by two talented young actors as the murderous couple, Michael Ooms and Vanessa Wasche, who believably scheme and murder their way to the top, only to see their guilt and regrets drive them to madness. The other seven cast members (including Eric "Pogi" Sumangil, Garry Geiken, Laura Esping, and Neal Beckman) play various other lords, ladies, soldiers, and servants, quickly changing identities (and sometimes genders) with the help of Sarah Bahr's versatile edgy costumes. The effect of Macbeth seeing ghosts at the dinner table is nicely accomplished by a mirror that turns into transparent glass and back again (I just wish I couldn't see the neon green exit sign reflected in it throughout the show).

Park Square houses two theater spaces in the historic Hamm building, and it's not uncommon for me to arrive thinking I'm in one theater and then finding out I'm in the other one. I assumed Macbeth was in the larger upstairs proscenium theater, but was happily surprised to find out it's in the smaller downstairs thrust theater. The intimate setting puts you closer to the action, including some disturbingly real fight scenes (choreographed by Doug Scholz-Carlson) and yes, blood.

Public performances of Macbeth continue through April 9, with student matinees continuing through May 5 (click here for more information). It's a pretty intense and frightening look at the (intentional and unintentional) evils caused by the single-minded pursuit of power.