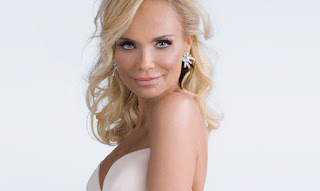 Kristin Chenoweth, star of Broadway, TV, and film, performed with the Minnesota Orchestra last night and it was something to behold. We all know that she has an incredible voice, a vocal powerhouse that belies her petite 4'11 frame, and acting chops to spare. But it turns out she's also a genial and charming host and storyteller. She titled the show "An Intimate Evening with Kristin Chenoweth," and it did indeed feel like that. Entertaining and engaging the crowd with stories, introducing songs and sharing what they mean to her, flirting with the orchestra, chatting with audience members, it felt like we got the real Kristin with no pretense, not some role she was playing. It was her first time performing at Orchestra Hall and she was very humble and gracious about the honor and privilege of performing in such a place with the amazing musicians of the Minnesota Orchestra, and let it be known that she would love to come back. Anytime Kristin!

Kristin won her Tony for playing Sally in You're a Good Man Charlie Brown, but she's perhaps best known for originating the role of Glinda in the blockbuster hit Wicked (coming to the Orpheum Theatre this spring). She appeased her Wicked fans by singing "Popular." It's a super fun song (with lyrics that ring true: "celebrated heads of state... did they have brains or knowledge? Don't make me laugh. They were popular!"), every performance of which is a copy of the original - Kristin. I was thrilled to finally see the original in person.

Kristin sang a few other musical theater songs (an exquisite "Bring Him Home," a hilarious "Dance 10, Looks 3" with the phrase "tits and ass" replaced by "boobs and butt" like in her hometown Oklahoma performance), but most of the song list consisted of classics from the American Songbook (many of which were originally written for the stage or screen before making their way into popular music). Songs like Hoagy Carmichael's "I Get Along Without You Very Well," Johnny Mercer's "Moon River," Ira Gershwin's "The Man That Got Away," and Jerome Kerns' (her favorite composer) "All the Things You Are." Towards the end of the show she brought eight U of M students onstage to sing with her, supporting and encouraging local artists as much as they inspire her.

Kristin has incredible control over that powerful voice of hers and really knows how to work every phrase to its most beautiful effect. She holds the microphone 1-2 feet in front of her face and doesn't even seem to need it. Which she proved when for her encore she sang "Smile" without a mic, which was so lovely and the highlight of the show for me.

Kristin told several amusing stories, including one about getting lost in the skyway the night before on her way to Target (her favorite store). Broadway Stars - they're just like us! She also talked about her parents and growing up in Oklahoma, and shared her experience filming Patrick Coyle's local movie Into Temptation here in Minnesota (which I need to seek out to see her performance, the local sights, and the plethora of local actors credited).

As a former band geek I'm thrilled whenever I'm in the presence of an orchestra, and Broadway-themed concerts like this give me an excuse to go see them. Kristin brought her own conductor (Kevin Stites) and pianist (Ben Toth) with her, and they along with the pared down Minnesota Orchestra made these classic songs sound gorgeous. It was a night to remember!