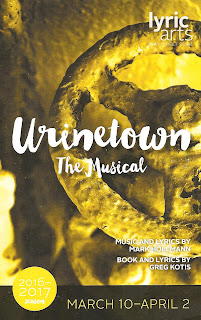 A wealthy businessman controls the money and the laws in a land with an extreme division between the haves and the have-nots, and he trains his beautiful and fashionable daughter to continue in his legacy by learning to manipulate great masses of people. Though it was written over 15 years ago, the hilarious and terrifying satirical musical Urinetown has never been more relevant. It's a huge warning about what happens when the earth can no longer sustain our way of life, when the poor become so poor that they refuse to take it any more. It would be a heavy and depressing piece, if the music weren't so happy and the jokes so liberally sprinkled in. In one of the better shows I've seen at Lyric Arts recently (they keep topping themselves), Urinetown is presented in all it's golden glory with a fantastic cast and really cool and grungy design. It'll leave you humming and tapping your feet, with a subtle thought in the back of your mind that we're in serious trouble if things keep going the way they have been. Just think of the happy music!

The 2002 Broadway hit with the funny name, Urinetown, is set in a dystopian future in which an extreme water shortage and corrupt businessmen and politicians have resulted in private bathrooms being illegal. Everyone must pay to use the "public amenities," with ever-increasing fees. The difference between the haves and have-nots is extreme, with the populace living in poverty and saving every penny, while the owner of Urine Good Company, which controls the amenities, and his pals live in luxury. (You see why this story is so great, and a little scary?) The story is narrated by Officer Lockstock. His sidekick, Little Sally, is constantly asking him tough questions. Their conversation frequently breaks the 4th wall as they comment on the show at hand. As Ms. Pennywise fiercely enforces the fees, the hero of our story, Bobby Strong, decides that people shouldn't have to pay to pee, and leads them in a revolution to take back the toilets. Along the way he falls in love with the innocent and trusting Hope, daughter of the evil Mr. Cladwell. As we're told, this is not a happy musical. We don't get the happy ending we expect, but it sure is fun to watch it all unfold.*

Director Matt McNabb leads the cast in a highly stylized, exaggerated movement, campy style that is super fun to watch. My fellow Twin Cities Theater Bloggers (including representatives from Twin Cities Stages, No Filter Reviews, Artfully Engaging, and Play Off the Page) and I had the chance to talk to the cast after the show and they shared that within the framework of the direction about the overall tone, they were each free to explore their character and bring unique personality and movements to them. It shows. Each member of the talented ensemble brings something unique to the character and is consistent in their "cartoon character" creations throughout the show. There's a lot going on in the group numbers (with some fantastic choreography by Penelope Freeh), but it never feels too busy or too much, rather it's organized chaos that's pulled off smoothly and professionally.

If I had to pick a favorite in the cast, it might be Becca Hart, who makes some really specific and interesting choices as Hope. From prim and proper devoted daughter to wild-eyed revolutionary, it's really interesting to watch that transition and the thoughtfulness she obviously puts into every moment (both vocally and physically). Another standout is Kate Beahen as Little Sally (Kate previously played Pennywise in last year's production at Daleko Arts). I've always seen this role played by someone short and childlike, which Kate is not, but she totally makes the role her own and brings a naive innocence as well as street smart wisdom to it. Also great are Tim Beeckman Davis as the narrator Officer Lockstock, Audrey Johnson as Pennywise, a young and talented Austin Stole as Bobby, and Peter Aitchison as the (literally) mustache-twirling bad guy Cladwell.

Urinetown is one of my favorite musical theater scores to listen to (and sing along with in my car); it's so smart and clever and peppy. But it's not easy, with many overlapping parts and interweaving melodies. Music director Elise Beckel Santa makes it all sound great, leading the off stage five-piece band (we learned in the talkback that they're located in a 2nd floor dance studio and piped in due to space limitations backstage). Scenic designer Gabriel Gomez was also on hand at the talkback to share his inspirations for the set and how he recycled old set pieces (appropriate in a piece about sustainability). The TCTB had a chance to see the set up close, and it's incredibly detailed down to pee stains on the floor and plastic coins to be collected for the fee. But perhaps my favorite detail is the dull yellow droplets that adorn the upstairs railing.

At the talkback, someone mentioned a line in the new movie Hidden Figures about segregated bathrooms: we all pee the same color. And if you think about it, it really is the common denominator amongst us all (like the children's book Everybody Poops). I'm also reminded of the debate about bathroom laws and excluding transgender people from this most basic of human rights. This musical about bathroom rights may seem silly, but it's not far from reality, and represents our right to justice and equal access to all facets of life and society. The privilege to pee is something most of us take for granted (like many of our privileges), but Urinetown reminds us that not everyone is as fortunate as we are, and these privileges can be taken away if we don't stay alert.

If you haven't been up to Anoka lately to see what's happening at Lyric Arts, you're missing out. They've recently made the transition from community to professional theater, and are continuing to improve. They were kind enough to let me announce their upcoming season recently, which promises more good stuff to come. Urinetown continues through April 2 and is definitely worth the drive to Anoka (it's not really that far).


*Plot summary borrowed from my post about Jungle Theater's 2013 production.