"The Awakening" by Savage Umbrella at the Southern Theater 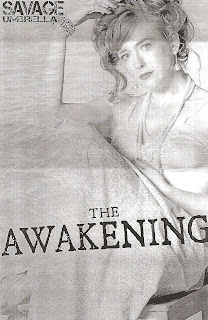 The 1899 novel The Awakening by Kate Chopin was ahead of its time. It depicts a woman who feels constrained and unsatisfied within the strict confines of the gender roles of the time, namely as wife and mother (like a precursor to Betty Draper). Only after Kate Chopin's death was The Awakening appreciated for the feminist work that it is, and it's appropriate that Savage Umbrella is bringing us their version of the story during Women's History Month, adapted by director Laura Leffler-McCabe and created with the ensemble. With a large cast utilizing physical theater techniques, live music performed by an onstage three-person band, and beautiful production design, The Awakening is a truly lovely and moving story of a woman's struggles to find her place in a world that doesn't accept her.

The first act of the play takes place on an island resort off the coast of Louisiana, where the wealthy of New Orleans spend their summers. Edna's (an empathetic and relatable Emily Dussault) friend Adele (Amber Davis) is a devoted (and pregnant) wife and mother, but Edna's feelings towards her own husband Leonce (Seth K. Hale) and their children are a bit more apathetic. Or rather, they're not wholly satisfying for her. The awakening of the title comes in the form of several experiences on the island, including hearing moving music played by her friend Mademoiselle Reisz (Alexis Clarksean), her daily swims in the gulf, and her growing relationship with Robert (a charming Nick Wolf), the son of the woman who runs the resort. It seems Robert often has a woman, married or single, to whom he devotes his attention every summer, but things begin to get serious with Edna, causing him to leave town on a business trip to avoid tempting her into an affair. Edna is bereft, and in the second act we see her back in town, beginning to shed the trappings of her domestic life. While her husband is on an extended trip to New York and her children are with their grandparents, she moves out of the family home into a smaller house. Awaiting Robert's return but unsure if he ever will, she finds companionship elsewhere. In the end she makes the only choice she can within the confines of society.

In addition to the strong leads, the 15-person cast (including one adorable child) works well as an ensemble, incorporating elements of physical theater in representing the waves of the gulf, or the sounds of the night. The swimming scenes are particularly beautifully portrayed. It's no surprise to find that there is some crossover of company and ensemble members with Transatlantic Love Affair; there is definitely a similar feel, from the bare feet of the cast to the way they physically inhabit the world they create

There's a clear difference in the look of the first act, summer on the island, and the second act,
"winter" in New Orleans. The island is all breezy pale clothes, whitewashed wooden set pieces artfully splattered with pastel watercolors, and the bright light of the summer sun. In the second act the clothes are darker and more formal, as is the furniture. Also gone is the freedom of summer on the island. The entire look is soft and lovely, with beautiful period costumes including some stunning drop earrings. (Set design by Meagan Kedrowski, light design by Adam Raine, costume design by Sarah French.)

Music is incorporated into the story in an organic way. The three-piece band led by Nic Delcambre on piano (with clarinet and violin) provides a soundtrack and sets the tone for each scene. Sometimes the band is even a part of the story in the party scenes, and the cast occasionally sings in context or to comment on the story like a Greek chorus (original music by Candace Emberley).

I had never heard of Kate Chopin or The Awakening before seeing this show, but now I'm eager to read the book. In the meantime I have the memory of Savage Umbrella's truly lovely interpretation of it (continuing at the Southern Theater through March 18 as part of ARTshare).