"The Paper Dreams of Harry Chin" at History Theatre 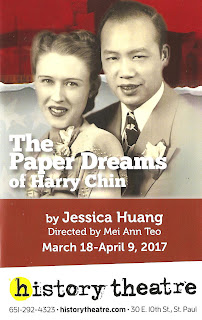 I just got back from my annual trip to NYC, "center of the universe," where I saw six Broadway shows in five days (read my mini-reviews here). While I was there, I also took a walking tour of the Lower East Side through the Tenement Museum, which I highly recommended if you're in the city. The tour was fascinating and served to reinforce the idea that the history of the Lower East Side, the history of New York City, the history of America is an ever-changing story of immigrants. Immigrants who have come to this country in search of better opportunities and better lives for their families. Unfortunately, our history also includes an ever-changing story of prejudice and discrimination against immigrants. Today, it's Muslim and Mexican immigrants that face the brunt of it. But the idea of keeping immigrants out due to fear is not a new one; in 1882 the first legislation against the immigration of a specific race was passed - the Chinese Exclusion Act. Local playwright Jessica Huang's new play The Paper Dreams of Harry Chin tells the true story of one Minnesota family affected by this legislation. In keeping with the History Theatre's commitment to tell the untold stories of all Minnesotans, it's a beautiful and affecting look at the very timely and relevant issue of immigration through the very specific story of one family.

The play is constructed as a mix of reality, dreams, ghosts, and memories - think A Christmas Carol, but less structured. In 1970, Harry Chin (Song Kim) is visited by the ghost of his recently deceased wife, a white woman named Laura (Sandra Struthers), followed by the ghosts of a friend with whom he immigrated (Sherwin Rescurreccion) and (spoiler alert) his first wife that he left behind in China (Audrey Park). Despite his protests, the ghosts get him to remember his past - the difficult decision to leave China for America to make money to send home to his family, the process and effects of being a "paper son" (read more on that here), meeting and marrying an American and starting a new family, and reconnecting with his Chinese family. Harry and Laura's daughter Sheila (Meghan Kreidler) thinks her dad is going crazy, but slowly begins to learn more about his past and family, shaking the foundations of her life.

The play has a dreamlike quality, as we move around in time and space, never quite sure where are or where we're going next. But the storytelling is clear and effective, thanks to the direction by Mei Ann Teo and this wonderful cast (which also includes Rolando Martinez as a scary immigration officer, among others). Joel Sass's scenic design sets a dreamy stage for the storytelling, including the silhouette of a house, the deck of a ship, the swinging door of a restaurant kitchen, and a charming paper mache car. Images and photos are projected onto the house and backdrop of the stage in a way that aids the storytelling (video design by Kathy Maxwell). Trevor Bowen's costumes range from the traditional clothes of Chinese immigrants, to modest '50s wear, to Sheila's fab '70s outfit, to some dreamy ghost culottes.

Playwright Jessica Huang (a Playwrights' Center Fellow) spent a lot of time interviewing the real Sheila about her family's story, and the play comes off as a love letter to her father, but one that exposes the difficulties he faced and the choices he made, choices that led to tragedy, but also to love. The Paper Dreams of Harry Chin is the story of one immigrant who did the best he could with the challenges that faced him and built a life in America, a country that is made up of the sum of millions of such stories.

The Paper Dreams of Harry Chin continues at the History Theatre through April 9.