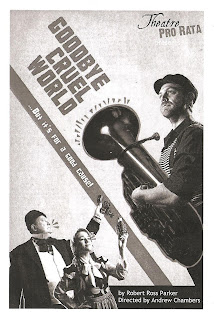 Theatre Pro Rata's Goodbye Cruel World closes today so if you haven't seen it already, I'm afraid you're out of luck. (Sorry about that, blame NYC.) But for the record, it's a fun and wacky ride ably driven by six actors playing multiple characters, often in the same scene. A modern adaptation of Russian playwright Nikolai Erdman's The Suicide, which was banned by the government and not produced until after his death, it's a farcical look at a man down on his luck who offhandedly wonders if he would be better off dead, only to be taken seriously by his wife, neighbors, and eventually the whole town. Everyone from the church to the intelligentsia, a post man to an artist, wants Semyon to promote their cause in his suicide note. His neighbor decides to turn it into a lottery, but in the end Semyon realizes he doesn't want to die, much to everyone's disappointment. Read on for some highlights of the show.


Theatre Pro Rata concludes their 2016-2017 season with their annual show in partnership with Park Square Theatre this spring - Up: The Man in the Flying Chair.