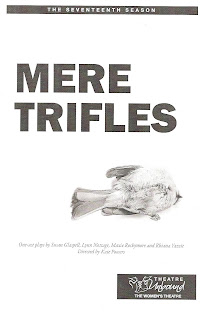 The month-long celebration of Women's History continues with Theatre Unbound's collection of four one-act plays written by women about women's stories. From a 100-year old play by a little known but important female playwright, to two new plays by local playwrights, to a play from the '90s by a nationally known playwright about to make her Broadway debut, the connecting thread of these plays is women making sometimes difficult decisions to better their lives and control their own destiny. Director Kate Powers leads the versatile six-person cast (Adam Gauger, Brian Joyce, Delinda "Oogie" Pushetonequa, Lynda Dahl, Nicole Goeden, and Pedro Juan Fonseca) through the stories, with short intros to each piece that provide interesting commentary but sometimes lead to awkward transitions. Below is a short summary/reflection on each piece.

Trifles by Susan Glaspell
Wikipedia tells me that Pulitzer Prize-winning playwright Susan Glaspell is considered "American's first important modern female playwright," but is far less known than the playwrights she discovered while running her theater company Provincetown Players, such as Eugene O'Neill. Her 1916 play Trifles is based on a true story she covered as a reporter in Iowa. It takes place in a farmhouse where a man was discovered strangled to death while sleeping next to his wife. The male investigators look for clues in the house, while the women concern themselves with "trifles" like packing some things for the new widow and checking on her fruit jars. They piece together what happened, but don't share the information with the men, being sympathetic to the woman whose every joy was sucked out of her by her abusive controlling husband.

A Few Pearls by Rhiana Yazzie
Local theater artist Rhiana Yazzie tells the story of a mother and daughter who reunite at the airport on their way to the grandmother's funeral. Despite their strained relationship, the daughter convinces her mother to tell her the story of her past and how her Italian mother came to be married to her African American soldier father. The mother demurs that these things are just "trifles," but everyone's story deserves to be told.

Bang-Bang Check! by Maxie Rockymore
Things go horribly wrong in the production of a play about domestic violence. The moral of the story is that anyone can be the victim of domestic violence (one out of five women and one out of seven men, according to the introduction), and check your props carefully before the show.

Poof! by Lynn Nottage
I've seen and loved two of Lynn Nottage's plays: Intimate Apparel (which I saw at the Guthrie years ago, and look forward to seeing Ten Thousand Things' production this spring) and By the Way, Meet Vera Stark. Her hot new play Sweat is about to make its Broadway debut (and is rumored to come to the Guthrie next season). But before all that, she wrote this odd little play, about a woman whose abusive husband one day disappears in a poof of ashes. The woman is rightfully shocked at first, but after discussing it with her neighbor and friend, realizes the freedom she now has.