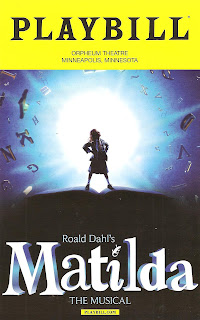 Matilda is a wildly successful musical (both in England where it originated and here in the States) based on the 1988 children's book of the same name. But I had no familiarity with either the source or the musical when I arrived at the Orpheum Theatre yesterday, which is often the best way to experience theater. I found Matilda to be charming yet dark, with some breathtaking physical and acrobatic scenes. And the children of the cast are so good, I almost suspect they're just short adults and not really people who have lived on this planet less for than a dozen years. There were lots of kids in the audience too, and while it's a pretty late night on a school night, and perhaps a bit dark for the young ones, it's a wonderfully thrilling musical for any age.

Matilda is an exceptionally bright 5-year-old (played by an actor about twice that age, because no 5-year-old can be expected to lead a musical) who had the bad luck of being born to parents who value neither her nor her intellect. It's really difficult to watch these neglectful parents constantly belittle their child, and understandable when Matilda gets her revenge by bleaching her dad's hair and gluing his hat to his head (because "sometimes you have to be a little bit naughty," which I guess is the child equivalent of "sometimes being a bitch is the only thing a woman has to hold on to"). Matilda finds a kindred spirit in her teacher Miss Honey, as sweet as her name, despite the abusive nature of the school and its headmistress Miss Trunchbull. Miss Honey supports Matilda in her gifts (which not only include the ability to read novels at the age of five, but also telekinesis), and in exchange Matilda helps Miss Honey solve the mystery of her parentage. There's a lot of wacky fun and dark comedy, but in the end this is a story about two people finding love and a home in each other.

Three young actors rotate in the role of Matilda, and I had the pleasure of seeing Gabrielle Gutierrez, who is a delight and everything you would want in this spunky heroine. All of the kids are so cute and so talented, including the Twin Cities' own Soren Thayne Miller (seen in such local shows as Ragtime, Diary of a Wimpy Kid, and The Music Man) in a featured role as Bruce, who is forced to eat an entire chocolate cake as punishment and then leads the "revolting children" in their big number. These kids are given some pretty intricate choreography (by Peter Darling, who also choreographed Billy Elliot, which totally makes sense) involving balloons, swings, trampolines, and scooters, and perform it all with precision and feeling, like Spring Awakening Junior. The adults aren't bad either. Highlights include Darcy Stewart and Matt Harrington (with a little improv with the audience at the top of Act II) as Matilda's wacky parents, Jennifer Bowles as Miss Honey, and a scene-stealing Dan Chameroy as Miss Trunchbull, so bad s/he's good.

Fun activity for intermission - a giant word find in the letter tiles around the proscenium arch. The theme is continued on the set, with interlocking blocks and tiles (including a super cool scene in which alphabet blocks are inserted into a gate upon which dancers step, sit, and twirl). The set is modern yet period feeling, and as magical as the storytelling (set and costume design by Rob Howell).

If you want to experience the charm and magic of Matilda, hurry - she's in town only through Sunday April 2. Great fun for grown-ups and mature little ones alike (but make sure everyone takes a nap, they inexplicably have 8 pm showtimes on weekends, which makes no sense for a nearly 3-hour show with a large child audience).