"Ragtime" by Theater Latte Da at the Ritz Theater 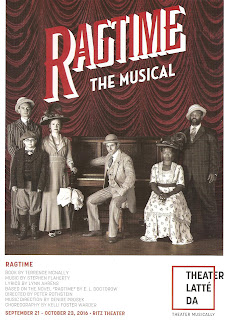 Theater Latte Da is opening their 19th season (and their first season in their new home, the Ritz Theater in NE Minneapolis, where they have been in residence for a few years but only recently purchased) with a Tony-winning musical written nearly 20 years ago, set 110 years in the past, that is perhaps the most timely and relevant musical for the America we're living in now. Ragtime (book by Terrence McNally, music by Stephen Flaherty, lyrics by Lynn Ahrens) deals with the two biggest social issues of the day - anti-immigrant sentiment and racism (not to mention issues of class and gender). Based on the 1975 novel by E.L. Doctorow, Ragtime explores the tension that arose from the clash of cultures in New York City in the early 20th Century. When viewed through the lens of the present time, in which black men are repeatedly killed for no reason other than the color of their skin, the clothing they're wearing, or being in the wrong place at the wrong time, and businesses in our own small towns put up signs that say "no Muslims allowed," this already powerful story, beautifully told through words, characters, and music, becomes even more meaningful and important. Director Peter Rothstein and his incomparable team of actors, singers, musicians, and designers have brought this story to life in a way that's aesthetically pleasing, highly entertaining and engaging, and most importantly, clearly delineates the parallels with our own world.

Ragtime tells the story of three families - an upper class White family, an African American family, and an immigrant family. The three families' lives become intertwined with each other, as well as with several historical events and figures, such as anarchist Emma Goldman, magician Harry Houdini, and chorus girl Evelyn Nesbit. The hero of our story is Coalhouse Walker, Jr., a ragtime piano player in love with a poor servant named Sarah. Coalhouse's journey takes a drastic turn when he's faced with discrimination and tragedy. Sarah lives with the seemingly perfect well-to-do family consisting of a father, a mother, and a son, as well as mother's younger brother and father. Curiously, these characters (with the exception of the son, Edgar) don't have names, so that they could be anyone or everyone. Mother keeps the home fires burning while Father explores the world, and Younger Brother is on a journey all his own, always looking for something to cling to and finding it in unfortunate places (or persons). Finally, at the center of our third family is a poor immigrant trying to make a better life for his daughter. Tateh's path crosses with Mother's several times; in fact all of the characters in this story are connected somehow, and what each does affects the others.*

Several moments in the show clearly spoke to me about today's world, and sound like they could be heard on the news on any day. Struggling to find a way to support his daughter and facing opposition at every turn, Tateh cries out, "I'm not 'you people,' I'm Tateh!" Ragtime shows us that immigrants are not "others," they're people, most of whom are coming here to make a better life for their children, the same reason that all of our ancestors came to America. After his car is vandalized simply because he dared to drive into a white neighborhood, Coalhouse demands, "I'm not some fool, I'm not their n***er, I will have what's fairly owed me," which sounds very much like the demands of the Black Lives Matter movement. All Coalhouse is asking for is to be seen as a worthy human being, to be fairly treated, and to live his life with his family unencumbered by discrimination and violence.

As usual with Theater Latte Da, the show is perfectly cast. Just 14 actors play all the roles, which is a fairly small number for a show this epic (in listening to the score again and reading about the show, it seems there are a few minor characters that were cut or combined to make the small cast feasible). Many of the actors also double as chorus members, and while there are a few moments of "What's Tateh doing in this scene? Why is Emma Goldman there?" you quickly learn to let that go and see them as players in the story. The small cast really works to accentuate the intimacy of this epic story. Highlights in the cast include, well, everyone:
Ragtime is one of my favorite musical theater recordings to listen to, featuring that distinct and rhythmic ragtime sound, as well as sweeping anthems. The offstage band directed by Denise Prosek sounds much richer than it should with just five members. I didn't miss a thing not having brass or strings. And the cast sounds gorgeous, individually and particularly in harmony.

The staging and every element of design is just stunning. Latte Da continues to make good use of its new home at the Ritz, fitting the shows into the gorgeous bones of the old theater rather than trying to cover them up. For this show, scenic designer Michael Hoover has created a false back wall on the otherwise open and empty stage, a wall that so closely matches the actual walls of the theater, with the exposed brick and mottled paint, that it looks like it's always been there (and I'm still not entirely convinced it hasn't). A floor-level door and two elevated doors, accessed by moving staircases of bare metal, are used for entrances and exits, and a well-placed piece of furniture or two is all that is needed to set the scene. The all important piano has a dual purpose, also representing Coalhouse's car as he sits on top of it. Not only is this an economic use of set pieces, but it somehow makes the destruction of the car more devastating as the piano is closely tied to the musician Coalhouse's identity. Recent Ivey Emerging Artist honoree Trevor Bowen has designed the authentic period clothing in a muted palate, saving a few pops of color for Coalhouse and the wealthy. Completing the picture is Mary Shabatura's lighting design, creating some beautiful silhouettes and shocking moments of terror.

I have no doubt that Ragtime will take its place on many year-end best-of lists. It deeply affected me in a way theater, or anything, rarely does. Not only is this show beautiful to look at and listen to and chock full of incredible performances, it does the thing that theater at its best is supposed to do. It provides thoughtful and meaningful commentary on the world we live in. I had tears behind my eyes for most of the show, and had trouble holding back sobs as it came to its intense conclusion. But the tears were not for Coalhouse, Sarah, Tateh, or Mother. The tears were for the Coalhouses, Sarahs, Tatehs, and Mothers of our own world, the ones we see suffering injustice on the news every day. In his final song, Coalhouse sings, "make them hear you." It's easy to feel frustrated and helpless at all of the injustices of the world. But there's one easy way to "make them hear you" - vote. If the issues illuminated in Ragtime are important to you, look at the candidates' stand on these issues. Look at their track records in fighting for justice and equality for all genders, sexual orientations, races, classes, and nationalities. And then vote. Make them hear you! Because "we'll never get to heaven 'til we reach that day," when every child can "ride on the wheels of a dream."

Ragtime is not just an exquisite piece of music-theater, it also shines a light on the issues of the day, issues that were never more crucial to consider than now in this election season. Thank you Peter Rothstein and Theater Latte Da for recognizing the brilliance of Ragtime and bringing it to us now when we need it most. Go see Ragtime between now and October 23, and then vote on November 8. Make them hear you!


*Plot summary borrowed from what I wrote about Park Square Theatre's 2012 production of Ragtime.
**Sarah and Coalhouse will get a second chance at a happy ending; Traci Allen Shannon will play Cinderella and David L. Murray Jr. will play her price in Cinderella at the Children's Theatre Company, opening in November.