"Broadway Songbook: Rebels! On Broadway" at the Ordway Concert Hall 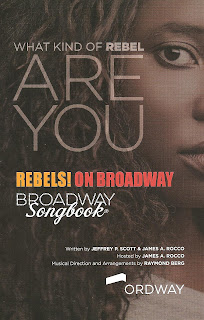 Now in its 6th season, the Ordway's Broadway Songbook series is a unique opportunity to learn about the history of American musical theater (my favorite topic) while being entertained by fabulous performances by some of the Twin Cities' top music-theater talent. I've attended nearly every installment of the series (except when they've inconveniently scheduled them for when I'm out of town), with topics ranging from composers like Irving Berlin and Cole Porter, to themes like the first 100 years and Rock and Roll. This is another theme-based Songbook: "Rebels! On Broadway." A more apt title would be "21st Century Rebels," as all but one of the musicals featured debuted in the 21st Century. But it's wise to limit the scope, because as host and co-writer James Rocco says, American musical theater began with rebels, and all major strides forward were made by rebels. Even Rodgers and Hammerstein were rebels when they began (a musical with a serious plot?!), and I can't think of a more rebellious act than burning a draft card onstage in 1967, which Hair did every night. But the best part about focusing on recent Broadway rebels is that it provides an excuse for performances of not one, not two, but three songs from the biggest Broadway hit in decades - Hamilton. That alone is worth the price of admission, but you also get lots of other great songs and stories in another fantastic installment of the Broadway Songbook series.

The Ordway always assembles an uber talented cast to share the songs that James talks about in his history lesson, and this show is no exception, with a cast that includes Brianna Graham, Caroline Innerbichler, Hope Nordquist, Julius Collins III, Reid Harmsen, Rudolph (Tre) Searles III, and Wes Mouri. These seven people can really sing, but not only that, they can also dance and emote and share the character of the song. The Songbook has come a long way in six years; I seem to remember a lot of standing at the mic and singing (nothing wrong with that), but the staging and choreography have gotten increasingly more and more complicated. With no choreographer credited, I can only assume that James provided the detailed, diverse, and show-appropriate choreography, beautifully performed by the cast. It's like seeing snippets of a dozen shows, and when one of those shows is the hardest ticket in the country to get, it's a treat.

Throughout the show James shares his and co-writer Jeffrey P. Scott's recipe for a successful and relevant Broadway musical: 1) original music that sounds like what people are listening to, 2) relevant themes, and 3) a cast that reflects the community we live in. Doesn't sounds so rebellious, does it? I think it's safe to say that no show in the history of Broadway has done that better than Hamilton, with its modern hip-hop score, themes of the building of America that are still relevant today, and a beautifully diverse cast. This equally beautiful and diverse cast, although not quite as large as the Hamilton cast, perform three numbers from the show: "Alexander Hamilton," "The Schuyler Sisters" (with Brianna as Angelica, Caroline as Eliza, and Hope as Peggy) and "My Shot." These performances are fan-freakin-tastic! So full of energy and drive, beautifully sung, and with intense choreography. I am counting the days until we can have a local production of Hamilton (even if those days are in the thousands), or at least a concert, or something. Our local talent is more than capable of bringing Lin-Manual Miranda's brilliant and wordy score to life, as these seven performers showed (I can't decide if Julius should play Hamilton or Burr, he rocked both parts on different songs).

Hamilton is definitely the highlight and the showstopper of this Broadway Songbook. But it's not the only show featured. We also hear songs from other rebellious shows such as the Green Day musical American Idiot (what I like to call the RENT of the millennial generation), the Cyndi Lauper penned Kinky Boots (a great solo number by Reid), Bombay Dreams by Indian composer A.R. Rahman, two songs from the delightfully irreverent The Book of Mormon (perhaps the most rebellious of all these shows), one of my personal favorites Spring Awakening, last year's Tony winner and atypical musical Fun Home, current Broadway hits (although not that rebellious) Waitress (a beautiful song by Caroline who, as James said, "just keeps getting better and better") and Something Rotten (with Wes taking the lead on "God I Hate Shakespeare"), and Lin-Manuel's first hit, In the Heights. Which was followed by "Somewhere" from West Side Story for no particular reason, other than to appease the Ordway crowd who's "used to hearing Cole Porter and Gershwin," to plug the Ordway's upcoming production of the show with Theatro del Pueblo, and maybe also because Lin-Manuel wrote new Spanish lyrics for the 2009 revival, although not for this song. But I'm not mad at the inclusion of "Somewhere" in the Rebels Songbook; I've never heard it done as a trio (Tre, Hope, and Brianna), and it's stunning.

The Ordway's Broadway Songbook often runs for one weekend only, but this time you've got a second chance if you can't make it to their gorgeous new Concert Hall (with gorgeous sound as well) this weekend. Four performances remain, through September 30. Musical theater fans, you have been warned - the Songbook is your must-see musical theater education and entertainment!