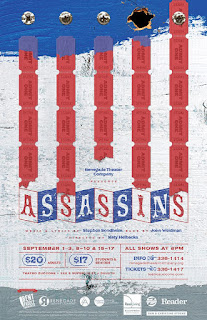 On Sunday morning of Labor Day weekend, I sat with a view of gorgeous Lake Superior (the closest thing Minnesota has to an ocean) on a perfect late summer day and started working on this blog post. Like most of the good things in my life, I have theater to thank for this view. Duluth's Renegade Theatre Company just opened their production of Stephen Sondheim's Assassins, and since I love Sondheim (what musical theater nerd doesn't), have never seen Assassins, and no Twin Cities theater company has done it in my recent memory, I decided it was  the perfect excuse to go to Duluth for the holiday weekend. Accompanied by my fellow Twin Cities Theater Bloggers Gina from The Room Where It Happens and Julie and Carol from Minnesota Theater Love, we hopped in my VW bug convertible (top down) for a beautiful drive that not even construction traffic could spoil. Staying at the lovely B&B Solglimt (just on the other side of the lift bridge, so within sight and walking distance of Canal Park but away from the craziness), seeing an excellent production of a Sondheim musical, having Brunch with Blake Thomas (one of my favorite Minnesota musicians), chatting about theater with friends, and eating lots of good food turned out to be a nearly perfect Labor Day weekend (almost as good as the five Labor Day weekends I spent at the best little music fest in Minnesota). Moral of the story: sometimes it's good to get out of the city and see more of our fair state, but you can also see some pretty great theater while you're there.

This was only my second trip to Renegade, but I'm really impressed with their choices of plays and musicals to produce. Last year I saw the beautiful new musical Eastland; they were only the second theater in the country to do it after Chicago's Lookingglass Theatre. As I mentioned, I don't know of any Twin Cities companies that have done Assassins in the last 5-10 years, which makes it an exciting and interesting choice for Renegade. Assassins premiered Off-Broadway in 1990, finally making it to Broadway in 2004 (starring Neil Patrick Harris, before he was NPH). It's a fantastical story about people who tried or succeeded in assassinating a U.S. President, all of them meeting in a sort of carnival/dream/underworld, outside of time and place. Very dark, very funny, and more than a little scary as you get a closer look at people who, for various reasons, felt they needed to commit these horrible acts of violence on the national stage. It doesn't go too deeply into any one story, in fact it's the shortest Sondheim musical I know of at a brisk 90 minutes. (Or it's supposed to be, Renegade unfortunately decided to put in an intermission, which felt jarring as it broke up the flow and momentum of the story.) But it does give you a glimpse into each of these troubled individuals, most of whom I had never heard of before, and make you want to know more (Gina recommends the book American Assassins: The Darker Side of Politics).

Assassins features nine people who made an assassination attempt on eight presidents, four of which were successful, and most of whom I had never heard of. It's an intriguing idea to compare all of their stories, backgrounds, and outcomes, and see what it has to say about politics, celebrity, and mental illness (and why not do it in musical theater form?). Most of the assassins used guns as their weapon of choice, except for one particularly creative individual who tried to hijack a plane to fly into the White House to kill Nixon (why had I never heard of that?). The Proprietor (Jack Starr) sells them their weapons, while a Balladeer (Abe Curran) sings their stories. Each of them gets her or his moment and song, both the "hits" and the "misses" (the result displayed in lights after each attempt). They aim at a portrait of their chosen president with a target disturbingly superimposed on his face.

The show is bookended by the two most famous assassins, John Wilkes Booth (a wonderful Andy Bennett) and Lee Harvey Oswald (Abe Curran again, spoiler alert), who is talked into his infamous act by all of the assassins who have come before. We also meet the anarchist Leon Czolgosz (Joe Cramer), the Jodie Foster-obsessed John Hinckley (Matias Valero), the stomach pained Guiseppe Zangara (Alec Schroeder), the would-be ambassador to France Charles Guiteau (Nathan Payne), the Santa suit wearing Samuel Byck (Matt Smith), and the two female assassins (Emily Bengston and Mary Fox, providing some comic relief), both of whom attempted to kill President Ford within a few weeks of each other. Each is dressed in period appropriate gear, spanning the 1800s through the 1980s, with much attention to detail even down to the beer cans and food containers.

While we happily haven't had an assassination attempt in the U.S. for a few decades, we have had other horrific acts of violence. This show got me thinking how people became famous for acts of violence, and as Assassins suggests, that seems to be part of the reason why they do it, at least for some of them. We're fascinated by these people and their stories, and we all know their names. I wish we didn't give them that fame, that power.

Assassins is an odd show, straddling the line between comedy and tragedy. While there are definitely some funny moments, there are also some dark, sad, and scary moments. Maybe it's difficult for some audiences to catch that shift, resulting in some inappropriate audience laughter on the night I attended. The score isn't easy either, with typical Sondheim clever wordiness and unexpected melodies. Director Katy Helbacka, the large and talented cast, the off-stage seven-piece orchestra directed by Patrick Colvin, and the design team has really done a wonderful job with this dark, quirky, and not so commonly produced musical.

It was another successful theater road trip to Duluth, and I hear there's another rare musical choice TBA that might get us up there again next year. Duluth is Minnesota's vacation destination, so if you find yourself there, check out what Renegade Theater Company is up to and experience some art along with your nature.