"Sense and Sensibility" at the Guthrie Theater 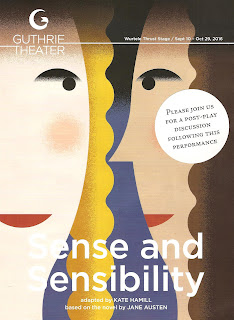 The Guthrie's 2016-2017 season marks my 14th season as a subscriber, and I'm still just as excited as I ever was to walk into that big beautiful building on the river. In fact, more than excited, it feels like home. It's my happy place (especially when preceded by dinner at my favorite restaurant, Spoonriver). I've always been a fan of the Guthrie, but there's a new excitement in the air. It's the second season for new Artistic Director Joseph Haj (who recently accepted the Ivey for the ensemble of Trouble in Mind), and you can already see the changes, specifically in a greater commitment to new works and greater diversity onstage and behind the scenes. The first play in the new season is a wonderful example of that. While Jane Austen's beloved novel Sense and Sensibility is over 200 years old, this is a brand new adaptation that tells the story with a freshness and drive that makes it feel new. And by the way, the playwright is a woman, a young woman, an actress, who played the role of Marianne in her adaptation off Broadway. The Guthrie's production is directed by a woman (Sarah Rasmussen, herself an exciting new Artistic Director over at the Jungle), with scenic and costume design by a woman, and featuring a cast that is two-thirds women and ethnically diverse. That is reason for excitement indeed, especially when the end product is this delightful.

Despite all the feminist credentials, Sense and Sensibility is a story that still might not pass the Bechdel test, or just barely. While there are considerably more than two female characters (1) with names (2), they pretty much only talk about boys (3). That's Jane Austen, it's all about who you're going to marry and how many thousand pounds they have. At least her characters are smart, strong, capable women who determine their own destiny, even if that destiny is which man they're going to marry. But that's the world she lived in, when options were more limited for women. Today, thankfully, we have more choices than that, but we can still look to Elinor and Marianne as models for how to accomplish our goals with determination, while still remaining loyal to our values and our friends and family.

I finished reading the novel (for the first time) just an hour before seeing the play (I swear I never cut my homework that close when I was in school, but my theater habit severely cuts into my reading time). It's a long book, and wordy, with many characters to keep track of. Kate Hamill has managed to adapt it to the stage with theatricality, wit, and purpose, using a chorus of "gossips" to provide a bit of narration and move the story along when necessary. The characters are well drawn and fairly easy to keep track of (sisters Elinor and Marianne Dashwood of the titular "sense" and "sensibility," their beaux Edward and Willoughby, and the various mothers-in-law, cousins, and friends), and the location flows smoothly from one country house to another, to London town and back again. These transitions are aided by the inventive scenic design (by Junghyun Georgia Lee) which features two concentric rotating circles on the floor of the stage (no trap doors here). Jane Austen's characters love to go for walks, and the rotating stage allows them to do so and still remain in sight of the audience. The most clever use of this set-up is in dinner scenes, when rather than sitting at a table with their backs to the audience, the characters sit on the rotating circle facing the audience, allowing us to see each one's reaction in turn, but differently depending on where in the theater you're sitting. It's a pretty genius use of the thrust stage, one I haven't seen before.

This strong female cast (and a few pretty great men too) consists of a nice mix of newcomers and Guthrie regulars. And as we've learned from Hamilton (or at least I hope we have), just because the story is set in an all-white past doesn't mean you can't have color in the cast, and in fact, it only makes the story stronger, more relevant, modern, and inclusive. Our opposite yet devoted sisters are played by Guthrie newcomers Jolly Abraham and Alejandra Escalante, who beautifully embody the spirits of our heroines, and have a wonderful chemistry with each other and the rest of their onstage family (Guthrie favorite Suzanne Warmanen as their mother and scene-stealer Isadora Swann as their younger sister, sharing the role with Natalie Tran). The endlessly entertaining Robert Dorfman and Sally Wingert bring their unique humor and stage presence to their roles of John Middleton and his mother-in-law Mrs. Jennings. Recent transplant to the Twin Cities with a ton of TV credits to his name, Remy Auberjonois walks that fine line of charm and reserve as Colonel Brandon, making it easy to see how the sisters warm to him (despite his advanced age of 35). Other highlights include local faves John Catron, adorably awkward as Elinor's Edward; Torsten Johnson, bringing great energy and physicality to the devilish rogue Willoughby; Kris L. Nelson as the sisters' not very brotherly half-brother; and Emily Gunyou Halaas and Aeysha Kinnunen as the flighty Steele sisters, aka the anti-Dashwoods.

Jane Austen fans will want to see this fresh and dynamic new adaptation. And even if you're not an Austenite, it's wonderful to see women's stories told by women, especially in such a delightful and entertaining way (continuing through October 29).