"The Taming" by Theatre Unbound at SteppingStone Theater 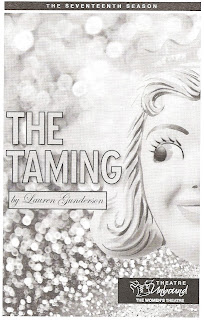 Women in politics. It's a pretty timely issue in this election season that may end with America's first woman president (if we're lucky and vote smart). Theatre Unbound's The Taming looks at women and politics, specifically "three powerful, ambitious, and politically motivated women: an animal-loving Democratic social media giant, a workaholic Queer Republican Senator's aide, and a Miss America-hopeful who attempts to break their divide and bring the parties together to rewrite the constitution" (per a note in the program from director Mel Day). Inspired by Shakespeare's Taming of the Shrew, but not bearing a whole lot of resemblance to it, there's still a whole lot of fodder for political satire, humor, and wackiness, and The Taming delivers.

Katherine (the hilarious and extremely expressive Nissa Nordland) is an uber-patriotic beauty pageant contestant who wants to rewrite the constitution. And the thing is, she doesn't sound crazy. Shouldn't a document written centuries ago by men who couldn't even imagine the world as we know it today be given a second look? Katherine goes to extreme measures to accomplish this task, kidnapping a Republican senator's aide (Julie Ann Greif) and an animal rights activist (Kelsey Cramer) to bridge the gap between the parties and make some improvements in the way things are done.

After too much ether, dispensed by Katherine in an attempt to calm things down, we suddenly are transported to the late 18th Century when the founding fathers were discussing and arguing over the very document Katherine wants to amend. Much like Katherine, George Washington tries to get his two friends James Madison and Charles Pinckney to agree on the constitution. Having them speak in modern language provides a stark contrast to the very period-specific issues of slavery and the treatment of women. Back in the present, the discussion continues, leading to a surprising conclusion. But maybe not that surprising after all.

I had never been to SteppingStone Theatre, the historic building off Summit and Victoria in St. Paul. It's a great choice for this play; the stage under the quaint arch lends itself well to the pageant theme.

The clever, funny, and topical The Taming continues through September 24.