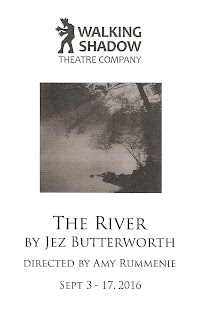 If your new boyfriend invites you to his cabin to go fly fishing in a river by the sea, just say no. That's what I learned from Walking Shadow's The River. This seemingly happy new relationship takes an unsettling, unexpected, and vaguely creepy turn over the course of 90 minutes. I don't want to say too much about what happens, because the discovery and the figuring it out is half the fun of this play. Or maybe fun isn't the right word. But this fascinating exploration of love and relationships, with strong performances by the cast, fluid unhurried direction, and a spot-on detailed set is definitely entertaining.

The play takes place at a fishing cabin, with beautifully detailed set design by Steve Kath in a way rarely seen on Open Eye's tiny stage. It's a place that looks familiar to us cabin-going Minnesotans. Except we don't fish for sea trout in Minnesota. That's the game here, but it's more than a game, it's a life's passion for "the man." So when he brings "the woman" up to the cabin to experience it with him, it's a big deal. Or is it? I spent much of this play trying to figure out what was happening, but in a good way. The kind of figuring out that keeps you completely engrossed and on the edge of your seat to see what happens next. And I'm not going to tell you what that is, but there are conversations about big and small things, and characters who aren't who we first think they are. Intrigued? You should be!

There are a lot of fishing metaphors for relationships - the one that got away, there are other fish in the sea - and this play uses them to great effect. The fisherman is always searching for that feeling he had as a seven-year-old boy catching his first fish, only to watch it slip out of his fingers and back into the water. So, too, is the man searching in his relationships, always trying to recreate the feeling he had with the one that got away.

The River features Andrew Erskine Wheeler in another compelling and natural performance, bringing depth and nuance to a complicated character (see also Walking Shadow's The Christians). He's well matched in Emily Grodzik and Elizabeth Efteland as two of the women he brings to the cabin, similar yet different.

Director Amy Rummenie sets an unhurried pace, letting things play out in their own time, including a long scene, silent except for music, in which the man cleans and cooks a fish live on stage (the squeamish and vegetarian, be prepared to close your eyes, and don't sit too close). And then they eat it! I'm fascinated by people cooking and eating on stage so I was thrilled by this, although I'm not entirely sure how they did it (I was sitting far enough from the stage that I happily did not smell anything). Either a) there is a working oven on stage that really cooks the fish as we watch and wait, b) someone backstage does a switcheroo from raw to cooked fish, like on a cooking show, c) the fish is pre-cooked (with its head on?!), or d) they eat uncooked fish. Such is the magic of theater!

The River continues at Open Eye through September 17.