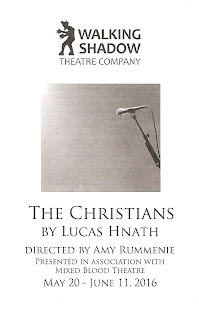 Why do we believe what we believe? Can our beliefs change? What happens when those we love don't believe the same things we believe? How important is it to find a group of people that believe in the same things you do? These are just a few of the questions raised by Walking Shadow Theatre Company's excellent production of the thought-provoking play The Christians. In just 90 minutes or so, we witness the pastor of a hugely successful church lose everything because he preaches what he believes, which contradicts the teachings of the church, causing everyone in his life to reexamine their beliefs as well. And it just might have this same effect on the audience.

Playwright Lucas Hnath (who also wrote the equally complex and thought-provoking Death Tax, seen at Pillsbury House last year) has constructed this play as a sermon. Director Amy Rummenie shares some of his stage directions in the playbill, which call for wired microphones, explaining:

It's helpful to know that going in, otherwise I might have wondered, why are these two people speaking into microphones while having a private conversation with each other? But it works to tie the scenes together and create a consistent style to the show.

Mixed Blood's black box theater in an old firehouse has been transformed into a church. The stage looks like a modern Christian church, complete with pulpit, cross, and choir seating (set design by Eli Schlatter). A few minutes before showtime, the choir filters in and begins singing passionately a selection of modern Christian songs. Soon the pastor and his wife along with a few church members walk through, greeting the crowd, and taking their places on stage. Then the sermon begins, the sermon that changes everything for Pastor Paul and this church that he built from nothing (with monetary help from his followers) over many years. He begins to preach the radical idea that there is no hell, and that everyone goes to heaven, regardless of what they believe. This goes against one of the fundamental teachings of Christianity, and needless to say causes some tension among the church staff and members. They begin to question Pastor Paul, and one by one they leave, until he has nothing left but his beliefs. The show ends without any resolution, but with much discussion about theology, faith, community, and relationships.

This play seems very real, almost like you're really at a church service, partly due to the way it's written, and partly due to the excellent direction and acting. Everyone in the five-person cast (plus the choir members, who may not speak in words but speak volumes in their reactions) gives a natural and realistic performance. Brittany Parker steps out of the choir to deliver her "testimony" and ask troubling questions, raw and nervous and believable. Charles Numrich is the church Eldar who supports Paul, but only to a point. Kory LaQuess Pullam (who only gets more impressive the more I see him) is the questioning associate Pastor who'll rip your heart out as he talks about his dying mother. Bonni Allen, whom I associate mostly with comedy and/or musicals, is wonderful in the role of the Pastor's wife who loves her husband and is confused by his sudden transformation. All four actors are excellent in supporting roles, but Andrew Erskine Wheeler is the star of the show and gives a phenomenal performance. There is no pretense here, no sign of acting, he just is this sympathetic, frustrating, humble, egotistical, selfish, giving, complicated, magnificent man known as Pastor Paul. I was with him the whole way in this journey and felt his every emotion, from rapture to devastation.

As one of my Twitter followers noted, my May theater schedule unintentionally has a spiritual theme to it (which is appropriate, since theater is my religion). Bad Jews, Leap of Faith, Book of Mormon, and The Christians all deal in different ways with what faith means, and how it can look different in different religions, cultures, and most of all, people. I admit that the title The Christians made me a little nervous (as a Unitarian, I'm uncomfortable with too much Jesus talk), but it's not at all preachy. Rather it urges the audience to really think about what they believe, and why they believe it, and how important it is that others believe the same thing.

"I have a powerful urge to communicate, but I find the distance between us insurmountable." That's one of the reasons we do and see theater, to help to bridge that distance between us so that we can better communicate and understand one another. The Christians is a powerful and compelling human story told in an interesting way, and is highly recommended if you like theater that challenges you and makes you think (continuing at Mixed Blood through June 11).