"The Changelings" by Ten Thousand Things at Bedlam Lowertown 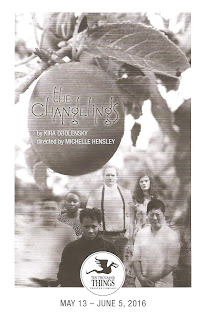 The final show in Ten Thousand Things' 2015-2016 season is another new play from their playwright in residence, Kira Obolensky. Ten Thousand Things is in the business of telling stories and sharing human truths through fairy tales, because that distance and sense of fantasy allows their non-traditional audiences (they perform for free in prisons, homeless shelter, community centers, etc., as well as paid public performances for more traditional audiences) to see their own lives and experiences reflected back at them, without the harshness of reality.* The Changelings, like last year's Forget Me Not When Far Away and Dirt Sticks two years ago, is a new original fairy tale set in an unspecified time and place (the playbill tells us the three plays exist in the same universe). And like those two plays, it's charming and funny and poignant as it speaks of love, loss, grief, hope, family, and community, a relatable human story set in a made-up world that appeals to traditional and non-traditional theater audiences alike.

In the odd little town of Threadville, the Cragg family was forever changed by a tragedy that happened 20 years ago. Their young son wandered out of the yard and has never been seen again. Mother (called Goat) and Sister spend their days working at the rope factory in town, completely without joy or hope. Father (called Freshface) opened up a betting house and took a mistress (typical). This is a world in which the wind and the neglected house speak, telling us of what happened and what is to come. One day, a man shows up claiming to be the lost son, and is met with skepticism by some and open arms by others. We never find out if this man is who he says he is, but perhaps it doesn't matter. He has brought joy and hope back into the Cragg house, and got them out of their stuckness, so that they can be complete and happy again. At least until the wind blows it all away again.

As usual, Ten Thousand Things has assembled a marvelous cast of some of the Twin Cities best actors, experts at the specific game of make-believe that is Ten Thousand Things. A few rows of chairs placed in a square in a fully lit room is their stage, whether they're performing in a prison, or shelter, or the bar/restaurant/arts center Bedlam Lowertown, or a small room in Open Book. It's remarkable that after six years of experiencing Ten Thousand Things, it feels completely natural to watch actors do their thing just a few feet in front of me, looking the audience directly in the eye, making side comments or giving a knowing wink. But it never loses the magic, that feeling that we're all in this together, creating an imaginary world that feels more real than reality sometimes. There's a lovely moment at the end of the play when we're asked to just stop and revel in the wonder of now, this moment, together in this space. That's quintessentially what theater is, and it's a feeling that's never more palpable than it is with Ten Thousand Things.

But about that marvelous cast. The wonderfully versatile Kimberly Richardson opens the show as the wind, blowing through the space and setting things in motion. She quickly transforms into an old nosy neighbor, and then into the aforementioned mistress, as gawky in her drunkenness as the wind is graceful. Kurt Kwan gives humanity to the house, literally embodying "if these walls could talk," and also to the kind and dependable Sharp, employee and adopted son of Freshface who's not so sure of this strange man. The Cragg family is composed of Mother Shá Cage (who transforms from a hard and grieving woman to a mother who gazes on her returned son with pure love), Father Luverne Seifert (endlessly watchable as always), Sister Joy Dolo (in what I believe is her debut with TTT, but she fits right in with her openness and playfulness), and Brother Ricardo Vazquez (emotionally raw and believable, at one point completely wet-faced and crying over a grave that's never explained). As the seventh member in this six-person cast, Annie Enneking provides the whimsical musical soundtrack and also plays the many voices on the radio, changing with the click of a dial (and I'm going to assume she also choreographed a couple of visceral fight scenes, because that's what she does).

Since Ten Thousand Things travels all over the state of Minnesota (they even went to Red Lake Falls on this trip, which I know is a 5+ hour drive because I do it twice a year to visit family in the small farming town in the Northwest corner of the state), they must travel light. That means just the bare minimum in set pieces, that clearly and quickly give a sense of place. Irve Dell has designed one of the most clever such pieces I've seen, a two-dimensional representation of a house, with outdoor things like flowers and a hose on one side, and indoor things like a hanging picture and a stove on the other side. The cast moves this piece from one side of the square stage space to the other, telling us if we're inside or outside the house. The representation of the all-important plum tree, with pickable plums, is just as clever and charming. Sonya Berlovitz's costumes let us see the change that takes place in the Cragg family as their world comes alive again.

Performances of The Changelings continue at Bedlam this weekend, and then move on to Open Book on Washington in downtown Minneapolis through June 5. It's yet another fine example of the delightfully fantastical yet grounded in reality type of storytelling that Ten Thousand Things does so well.

*For more on how Ten Thousand Things does theater, read Artistic Director Michelle Hensley's book All the Lights On, which forever changed the way I think about theater.