"The Sparrow" by Live Action Set at the Southern Theater 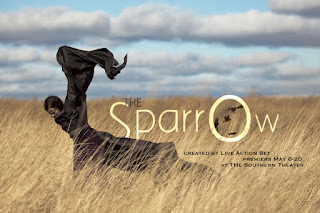 The lights went down, and figures staggered slowly onto the stage accompanied by loud mouth-breathing. No, this was not a stage adaptation of The Walking Dead (although I would totally go see that), it was Live Action Set's newest creation entitled The Sparrow. Like their previous two works presented at the Southern Theater (Basic North and The Half Life) The Sparrow is an odd and lovely piece that combines movement, music, acting, and spoken words. Not quite dance, and very far from what we typically think of as theater, it's an experience that defies description, but is definitely recommended if you're looking for something different and beautifully expressive (even if I'm not sure of what).


Sea-weary sailors regard the arrival of a sparrow as the harbinger of a journey's end. With it, momentum recycles, and a new journey begins. "The Sparrow" celebrates a world of infinite possibilities as it takes hold of joy by the jowls in this new portrait of explosive expression by genre-blurring Live Action Set.

I did not get half of that, but I don't think that matters. As director/creators Noah Bremer and Joanna Harmon explained in the post-show discussion (which they hold after every performance*), though they and the 20+ person ensemble might have a story arc in mind, it's not necessarily important that the audience sees exactly that. Rather that we open our minds and let the piece speak to us in whatever way it happens to. Which is difficult for logical left-brained people to do, but is also refreshing and rewarding when we let it happen.

So I won't tell you what this show was about, but I will tell you a few elements involved in the storytelling:

Here are a few words I jotted down at intermission: playful, graceful, awkward, joyous, perplexing. Live Action Set's The Sparrow is a beautiful piece of art that combines many genres of expression, and is a refreshing change of pace from the usual theater fare. Continuing through May 20 at part of the Southern's ARTshare program.

*I recommend attending the short post-show discussion to get more insight into the piece, and because it's awkward when there are more people on the stage than in the audience for the talk-back.