"Trouble in Mind" at the Guthrie Theater 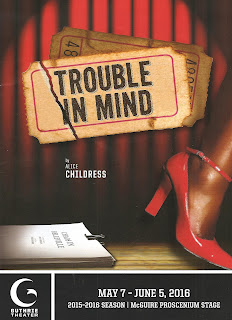 Friends, something exciting is going on at the Guthrie Theater. In the wake of (not unjustified) criticism about their lack of diversity onstage and backstage, they are currently presenting a 60-year-old play written by Alice Childress, one of the most important female African-American playwrights of the 20th Century, and directed by Valerie Curtis-Newton, the first African-American woman to ever direct on a Guthrie mainstage. And I'm happy to report that Trouble in Mind succeeds on so many levels. First of all, it's hilarious, engaging, and entertaining, and offers a behind the scenes look at the theater world we love so well. But more importantly, it talks about racism, sexism, classism, ageism in a smart and nuanced way that has as much resonance in today's world as it did in the 1950s NYC theater world depicted in the play. I was fortunate enough to attend on a night when there was a post-show discussion with the cast, which just made the experience that much richer. The best and most important work of theater is to start conversations about the world we live in, give voice to everyone's stories, and in doing so help us to better understand our fellow human beings. Trouble in Mind, and the conversations it will hopefully spark amongst its audience, is a fantastic example of that.

Trouble in Mind utilizes the play-within-a-play format that always results in a multi-layered meta-theater experience. In 1957 NYC, we meet the director and cast of a new play called Chaos in Belleville, one of those all too familiar stories about troubled noble black people and the magnanimous white people who help them. The diverse cast under a white male director talks about their own experiences with race and racism as they prepare the play-within-a-play, something that the actual cast did in the rehearsal process. So we have the racism in the world of Chaos in Belleville, in which a sharecropper is threatened with lynching when he tries to vote in the South, the racism in the world of Trouble in Mind, in which black actresses play the stereotypical maid role (see also By the Way, Meet Vera Stark), and the racism of today's world (yes, even in 2016 Minnesota), which informs the performances and our interpretation of the play. Believe me, that leaves you with a lot to think about.

The entire cast (comprised of six familiar and beloved faces and three welcome newcomers) is just genius. I can't even single anyone out because they all bring such depth and humanity to these multi-dimensional characters, none of them the hero or the villain. Margo Moorer is so strong as Wiletta, the star of Chaos, who believably transitions from putting on a happy face for the white folks, to standing up for her character and insisting on telling the truth of the story. Cleavant Derricks (the original Jimmy Early in Dreamgirls!) is just a charmer as the agreeable and somewhat dim Sheldon, while also delivering the most powerful monologue in the play (and he sings!). John Catron is so good at playing this hypocritical director (he's like Stephen Colbert on his old show: "I don't see race, people tell me I'm white and I believe them because [insert hilarious white people stereotype here]), that I was hoping someone would boo him at the curtain call, that's how good he is at being mean! And poor Kris L. Nelson takes the brunt of that meanness as the stagehand, sympathetic and funny as he just tries to do his job while constantly being bullied. Also excellent are Chloe Armao as the naive young white woman making her way in the big city in her first acting job, Marcel Spears as the naive young black man also learning how to function in this world (in a much different way), and Austene Van as sort of the opposite of Wiletta, demanding equality and respect from the start. And finally, proving that they are not the same person, Peter Thomson and Nathaniel Fuller both appear in this play and are both wonderful, Peter as the clueless white male actor playing the magnanimous boss, and Nathaniel as the sweet older Irishman with a kind word for everyone.

The entire play takes place on the stage of a theater, so there's not much suspension of disbelief required in terms of setting. Still, Jennifer Zeyl's scenic design transforms the McGuire Proscenium Stage into an authentic-looking '50s Broadway stage, open to the rafters, with various theater accouterments strewn about. Melanie Taylor Burgess' spiffy '50s costumes set the time period. And may I just say once and for all - the Guthrie's wigs put all other wigs to shame. No one should do wigs but the Guthrie, just use the actor's real hair unless the wigs can be this real-looking (even from the front row!).

At one point in the play, Wiletta talks about the "blue-eyed Indian chiefs" you see in the movies. Sixty years later we have two recent instances of white women playing Asian-Americans in the movies. That's only one example of how relevant and truly modern this play still is. Wiletta also says "we have to do better, we have to go farther." Sixty years later that's still true, and productions like this, and the conversations that ensue, are a great continued step towards that. Please go see Trouble in Mind before it closes on June 5, stay for the enlightening post-show discussion (call the box office to find out when they are), and have those difficult but meaningful and important conversations.