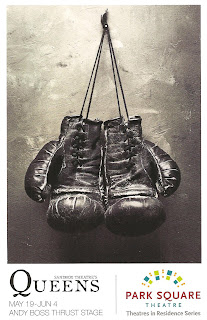 Sandbox Theatre has been around for over ten years, but I just "discovered" them two years ago at the Fringe. In those two years I have come to look forward to their shows, which are always new ensemble-created works that combine movement, music, and acting to create something quite unique, sometimes a bit odd, and often lovely. Their newest piece Queens has the smallest cast I've seen - just three actors - but is just as lovely and inventive as their other work. This seemingly simple story of a boy who goes in search of the father he never knew and becomes a boxer, losing himself in the process, is actually much deeper and more layered than it first appears (but I'll let you figure that out for yourself). This group of artists has once again created something unique and special and quietly lovely.

The simple story is this: Raymond grows up with a loving single mother, falls in love with the girl next door, but feels compelled to leave them both in search of his father. He stumbles into the life of a boxer, first being used in a betting scam, and then becoming a champion fighter. But he's still searching, not just for his father, but for himself, and who he is outside of the ring. Not a lot happens in the play, it's more of an exploration of characters and a quiet rumination on identity.

Two different actors play the boxer Raymond Queens: Theo Langason is the sweet young innocent Raymond in Act I, and Neal Hazard is the hardened weary older Raymond in Act II. This double-casting allows us to see the shift of time within the character and the effect it has on him. Both actors also play multiple other characters, and the third member of the ensemble, Emily Madigan, plays all of the female characters in the story, from Raymond's mother, to his girlfriend, to the bookie. The three work well together as an ensemble, and each creates distinct and memorable characters, even if only briefly seen. All use movement to tell the story, in factory scenes, in boxing matches, and in dances, with musical accompaniment by deVon Gray on keyboard in a subtle and unobtrusive way. No choreographer is noted, but I'm going to credit Emily who is a beautiful and expressive dancer. Her final dance, to a fantastic original song written and performed by Theo, is just exquisite, joyful and heart-breaking at the same time.

All of the action takes place on a boxing ring, designed and constructed by Derek Lee Miller in Park Square's basement thrust stage, with bleacher seats on the fourth side forming an in-the-round space (read more about that process here). The white square provides a frame within which the story is told and beautiful images are created by the movement of the actors (the piece is co-directed by Theo and Matthew Glover). Samantha Rei Crossland's simple and lovely costumes include retro boxing gear for the men, with pieces added to change character. But it's Emily who gets to wear the most beautiful creations - a simple and graceful off-white shift of a dress, made different with the addition of a gold sash, a newsboy hat, or (my favorite) an ingenious full and floor-length skirt that not only has pockets but is split into pants (where can I buy one of these?!).

Much of theater is busy and talky and flashy; it's refreshing to see something like this in which the pace is unhurried, things play out in their own time, and there are moments of silent movement. Sandbox has a unique process of creation and storytelling style that's put to good use in Queens (continuing through June 4).