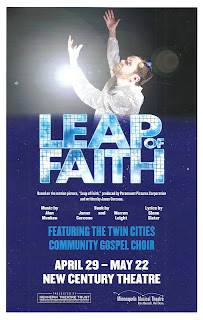 I really thought it would be raining when I left New Century Theatre last night, such is the power of Minneapolis Musical Theatre's Leap of Faith. If it were possible to bring the rain through the sheer energy of talented performers in a musical, downtown Minneapolis would be flooded every night! This musical adaptation of the 1992 Steve Martin movie flopped on Broadway in 2012, closing after less than a month. But perhaps it's better suited to more intimate theaters like the New Century, which, with curtains dropped on three sides, really feels like you're inside a revival tent. Yes, this mix of The Rainmaker and The Music Man is filled with cliches and nothing we haven't seen before, but the music is catchy and fun, and this cast delivers it with boundless energy that makes you want to rise up and be healed!


Jonas Nightingale is a lovable con man like Professor Harold Hill, except that instead of selling the idea of a big band, he sells miracles. And like Hill, he can't really deliver on what he's selling, but skips town before the townspeople realize they're being swindled. When Jonas and his crew find themselves stranded in a small Midwest town suffering from a drought, he promises to make it rain. The town Sheriff Marla is the Marion the Librarian in this story, skeptical and disbelieving, seeing Jonas for the con man he is. But like Marion, Marla begins to soften towards Jonas when she sees how he's bringing hope to her son Jake, who's been in a wheelchair for three years since the car accident that killed his father. In the end Jonas is changed by the people he meets in this town, and "gets his foot caught in the door" on the way out. After selling false faith for years, Jonas finally finds faith - in himself and the people around him.

Leap of Faith continues through May 22. Check it out for a fun and high energy show. And bring an umbrella, because this crew just might actually make it rain one night, if you believe hard enough.