"Buried Child" by Red Bird Theatre at the Southern Theater 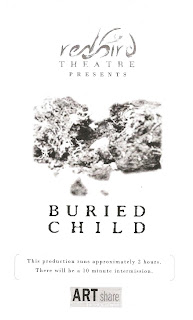 I'm starting to think Sam Shepard is a modern-day Tennessee Williams. Both write dark and tragic family stories, Williams focusing on Southern families, while Shepard's play have a modern Western feel (in tone if not geography). Shepard's first big hit was the 1978 Off-Broadway play Buried Child, which won the Pulitzer Prize for drama. Red Bird Theatre (a company previously unknown to me) is presenting this dark and twisted masterpiece as part of Southern Theater's ARTshare program, and I loved it. I'm not sure why, but the darker and more depressing a play is, the happier it makes me. Walking out of the theater after a Sunday matinee, it just felt wrong that the sun was shining on a beautiful day, and it took me a few minutes to shake the darkness off my shoulders. But what a wonderful experience; a terrific cast and excellent production of this darkly poetic and deeply disturbing American classic.

The dysfunctional family of Buried Child lives on a farm in Illinois. Patriarch Dodge (Terry Hempleman, an actor who seems made to speak Sam Shepard's words, see also Fool for Love and Annapurna, which isn't Shepard but could be) is an alcoholic with unspecified health problems who spends most of his time on the couch. Mother Halie is living in a fantasy world (Barbara Berlovitz, who excels at playing such women). Eldest son Tilden (Brian Goranson) has recently returned after 20 years living in New Mexico, where he got into some trouble, again unspecified (this play doesn't spell everything out for you). Younger son Bradley (Paul de Cordova) is a bully who seems most concerned with keeping everything neat and tidy. All live under the shadow of deceased son Ansel, the titular buried child, the details of which are doled out slowly until the horrifying final reveal. Tilden's son Vince (Matthew Englund) unexpectedly stops by for a visit with his girlfriend Shelly, a vegetarian who wears a rabbit fur coat and drinks beef bullion (Charlotte Calvert), but no one seems to recognize him. Things get more and more bizarre as Dodge convinces Vince to go get him a bottle and Shelly is left alone in this hellish household (tip: when a man calls you "girlie girl," it's best to get out of there as quickly as possible). Finally Halie returns with her boyfriend Father Dewis (Leif Jurgensen), and everything falls apart as the truth is revealed, changing everything, and nothing.

Director Genevieve Bennett (also Red Bird's Artistic Director) sets just the right tone of dark humor, allowing the audience plenty of opportunities to laugh, while never letting us forget the desperation of the situation and these people. And this top-notch cast really delivers, creating characters that are either despicable or sympathetic or both.

Rather than trying to create a realistic looking house inside the cavernous space of the Southern Theater, scenic/prop designer Justin Spooner just hints at the worn-down family farmhouse with a shabby couch, a free-standing screen door, and stairs leading backstage to an imagined upstairs where mother spends most of her time ("the world doesn't stop just because you're upstairs!"). And there are vegetables, lots of vegetables (I hope the cast has a feast every night after the show!). Costume designer Rebecca Bernstein has clothed the men of the family in almost too real-looking dirty clothes, which contrast with Halie's prim and proper attire and Shelly's NYC duds. Sound designer Tim Cameron keeps the sound of rain audible just below the dialogue (another reason the sunshine was so jarring after the show).

This was my fourth experience with a Sam Shepard play (see also True West, Fool for Love, and A Lie of the Mind), and I can't get enough. He's written dozens of plays and he's still writing (as well as acting in TV and movies), so hopefully I'll have more opportunities to experience his deliciously dark American stories. But for now you can experience his most acclaimed work through Red Bird Theatre's excellent production at the Southern Theater (through June 19).