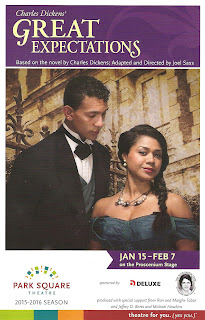 Expectations are high for Park Square Theatre's world premiere of a new adaptation of Charles Dickens' novel Great Expectations. Building expectations are a well-known and beloved novel, adaptation and direction by veteran local director Joel Sass, a diverse and talented cast, and the fact that Park Square has been continually raising the bar these last few years with the addition of a second stage and greater commitment to diversity of casting and programming. After attending opening night this weekend, I'm happy to report that these Great Expectations have been met with this innovative, funny, creepy, clever, suspenseful, and very well done production.

Most of you are probably familiar with the book. Maybe you, like me, read it in high school many years ago. Maybe your memories of the book, like mine, are vague, something about a young orphan named Pip and a crazy old lady named Miss Havisham wandering around a decrepit formerly grand mansion in a wedding dress. That's about the gist of it. Of course the story is much more complex than that, dealing with themes of class, education, money, love, family, and responsibility. This adaptation covers all of that, focusing on Pip's journey and the people he meets along the way. While coming in at close to three hours including intermission, which can be trying to a theater-goer, the story never drags and the length seems necessary to cover the epic scope of the story (my fellow morning people - just make sure to take a nap and grab a cup of coffee before heading into the theater).

This is a very smart adaptation by Joel Sass, who estimates that 95% of the spoken words are from Dickens himself. He very cleverly assigns the narration to the ensemble, as they take turns telling the story. The effect is much more interesting and dynamic that a single narrator would be, especially with an ensemble this talented. It was also a smart choice to have just eight actors play all of the characters in the story, making this epic tale more intimate, as we follow Pip through his youth at his sister and blacksmith brother's house, to his strange visits to Miss Havisham, to his mysterious benefactor who sends him to London to become a gentleman.

Although this is very much an ensemble piece, at its heart it's Pip's story, and young Ryan Colbert easily shoulders this burden. A recent graduate of the Guthrie's farm system (the U of M/ Guthrie BFA program), Ryan has been popping up on stages around town in the last year or so, most notably in Choir Boy at the Guthrie and Pillsbury House Theatre's Prep. This is a wonderful big stage leading role debut for Ryan that proves he is definitely one to watch. In a compelling performance, he's everything Pip should be, from the frightened little boy, to the ambitious teenager, to the gentleman who's perhaps a bit too big for his britches.

As the other most notable and iconic character, Barbra Berlovitz is a perfect Miss Havisham. Lovely and sad and crazy, with an air of fading nostalgia. Hope Cervantes is excellent as two polar opposites, the cruel Estella and the friendly orphan Biddy. The other five cast members (Ansa Akyea, Patrick Bailey, Adam Qualls, E.J. Subkoviak, and Cheryl Willis) ably fill in all of the other characters in Pip's world, and each is just a delight to watch in roles big and small with their range of British accents (especially from the two Brits, Patrick and Cheryl).

Joel typically designs his own sets when directing at the Jungle, but for this show he delegated those duties to Rick Polenek, who has designed a grand and shabby backdrop for the story. Although the settings are varied, ranging from a graveyard, to the blacksmith's cottage, to the streets of London, the set never changes. Tall fireplace, grand doorway, and an odd assortment of musical instruments, crates, and boxes cluttering the edges. The ensemble uses much of this clutter to create sound effects, using everything from kitchen utensils to the innards of a dismantled piano. The effect of these sound effects is quite delightful, as they help to evoke a feeling of creepy ghost story or amusing anecdote.

Twenty years after first encountering it, I am reminded why Great Expectations is such a classic. A poor young orphan boy with great aspirations, whose dreams suddenly and too easily come true, who eventually learns there's more to being a gentleman than money and fancy clothes. You have until February 7 to get yourself to downtown St. Paul to experience this innovatively re-imagined classic.