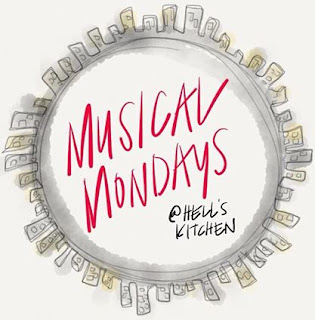 Happy New Year, friends! And what better way to ring in the new year than with the 34th installment of Musical Mondays at Hell's Kitchen! This monthly cabaret series takes place on the first Monday of every month, hosted by everyone's favorite BFFs Sheena Janson and Max Wojtanowicz, and features an alternating cast of local music-theater talent. This month's theme was the '60s, because... why not? Going into the show I couldn't think of any musicals from the '60s (duh - Hair), and most of the songs featured were from shows I'd never heard of. Which is part of the fun of Musical Mondays!

This month's talented cast featured Max as a last minute stand-in for a sick performer, Libby Anderson (currently appearing in The Wedding Singer at Old Log), Zach Garcia (who will be appearing in Artistry's Fiddler on the Roof this spring), Brianna Graham (appearing in Minneapolis Musical Theatre's Leap of Faith, also this spring), Angela Timberman (who will be appearing in Sons of the Prophet at Park Square in May), Paul Wittemore (starring in a one-man show in his shower, ticket details TBD), and music director/accompanist/vocalist Andrew Bourgoin (who will be playing the keys for the Ordway's upcoming production of A Chorus Line next month). Co-host Sheena didn't sing because she's saving her voice for Ten Thousand Things debut in Dear World this month!

In addition to the dozen or so solos, duets, and group numbers (you can see the full set list on the Musical Mondays Facebook page) we were also treated to a song from the upcoming new, original, locally created musical Right, Wrong, or Bomb! A Dating Musical. The show's stars Colleen Somerville and C. Ryan Shipley sang a song called "Wunch" that sounded a little Jim and Pam-ish, which is always a good thing in my book! The musical (directed by the fabulous Shanan Custer) runs for one weekend only at Illusion Theater, so get your tickets soon!

But last night was not all fun and games. My fellow bloggers Carol and Julie from Minnesota Theater Love and Laura from One Girl, Two Cities and I were cooking up some exciting plans that we will be announcing soon. So stay tuned! And make your plans to attend the next Musical Mondays on February 1, which should be lots of fun despite the fact that it's a Valentine's Day theme.