"Pericles" at the Guthrie Theater 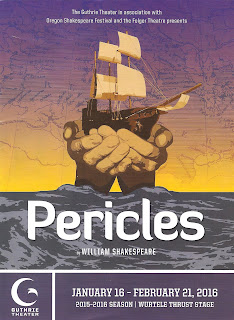 The Guthrie's newly inaugurated Artistic Director Joseph Haj makes his directorial debut with Shakespeare's Pericles, remounting a production that has recently played at the Oregon Shakespeare Festival and DC's Folger Theatre (with a cast that, for the first time in my memory, is entirely new to the Guthrie). It's a promising debut highlighted by playfulness, inventiveness, and diverse casting. And while I had a bit of a hard time with the play (as I often do the first time I see a Shakespeare play, unless Ten Thousand Things is doing it), I still found it to be an enjoyable experience with excellent performances, innovative set and technical design, and lovely original music. Welcome to Minnesota Joseph Haj, I look forward to what you will do in the future, especially when partnering with our fabulous local talent!

The story of Pericles includes over two dozen characters (played by just 13 actors) in various settings on land and sea. Upon first contact with the play, it's a bit tricky to keep everyone straight, but aiding in that task is the narrator Gower (Armando Durán, a pleasant guide). He introduces each act and tells us a bit about the characters and setting. A lot of crazy stuff happens (anyone who criticizes soap operas for their outlandish stories of incest, people returning from the dead, and long-lost relatives, is obviously not familiar with Shakespeare - the master of such outlandishness). Suffice it to say that our hero Prince Pericles (an appealing Wayne T. Carr) takes to the sea, is shipwrecked, falls in love with the good Thaisa (Brooke Parks, who also impressively plays another character with a completely different voice and attitude), is separated from her and their daughter Marina (the lovely Jennie Greenberry), and is lost in despair. It's an odd combination of campy comedy, sweet romance, and devastating tragedy that doesn't fit into Shakespeare's usual dichotomy of everyone dies at the end or everyone gets married at the end.

The ensemble cast is impressive (I was particularly drawn to U. Jonathan Toppo anytime he was onstage in various guises), but I couldn't help wishing that a few local actors had been cast in some of the supporting roles. The recent production of The Cocoanuts was also a transplant from OSF and included many of that cast, but our local talent filled in many of the roles. It would have been nice to see a few familiar faces on stage along with the newcomers.

This production of Pericles features inventiveness of design, with elegantly flowing fabric representing the waves of the ocean, a hanging platform mirroring the movement of the waves, and video projections to create the stars and the ocean (scenic design by Jan Chambers). Composer Jack Herrick has created an original "fairly eclectic, somewhat folksy, somewhat techno" score for the piece, with some of the character monologues being sung. Musician Darcy Danielson (who I swear was playing more than one instrument at a time) was joined in the band just offstage by several cast members. The combined effect of the set design, music, and Raquel Barreto's lovely and fierce costumes, is really quite dreamy.

Pericles continues through February 21, check it out for the first glimpse of the future of the Guthrie Theater.