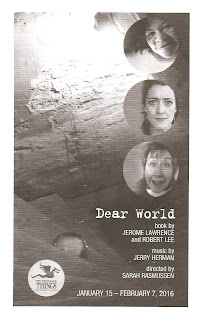 I consider myself a fan of musicals (although perhaps not quite an expert), but I had never heard of the 1969 musical Dear World that won Angela Lansbury her second Tony. It has certainly not seen the success of composer/lyricist Jerry Herman's other works, which include La Cage aux Folles and Hello, Dolly! That's hard to comprehend after seeing Ten Thousand Things' new production of Dear World, which reveals it to be a perfectly charming and lovely musical. But then, Ten Thousand Things productions have a tendency to reduce any work of theater, from Shakespeare to a Broadway musical flop, to it's most perfect, accessible, relatable heart. Under the direction of Jungle Theater's new Artistic Director Sarah Rasmussen, with one-man orchestra Peter Vitale and a beautifully diverse eight-person cast, Dear World is a musical that's sweet, funny, hopeful, and just a little bit wacky.


The eccentric Countess Aurelia (Janet Paone) reigns over a cafe in Paris, where her employees Nina (Sheena Janson) and Alain (Shawn Vriezen, the first deaf actor that TTT has worked with) serve champagne to their customers instead of water. When a prospector (Kris Nelson) insists on tasting the water, he detects a hint of oil, and reports the news to three greedy businessmen (Fred Wagner, Thomasina Petrus, and Christina Baldwin). They decide to blow up the cafe and send their assistant Julian (JuCoby Johnson) to do the job. Unlike the businessmen, Julian has a heart and a conscience and is reluctant to go through with it, especially after meeting and instantly falling in love with Nina (it is a musical, after all). So the Countess calls upon the Sewer Man (Kris again) and her two friends (Thomasina and Christina again) to help her save the world.

The songs of the musical are a mix of silly (the Sewer Man singing about "Garbage") and sweetly romantic (Aurelia's wistful "And I Was Beautiful" and Nina's hopeful "I've Never Said I Love You"). TTT's resident Music Director Peter Vitale once again brilliantly orchestrates this full Broadway score using just one or two instruments (playing them all himself, with occasional assistance from a cast member), and knows when to use a clarinet or an accordion or keyboard to create just the right mood. The incorporation of ASL into musicals is a trend of which I highly approve (see also Deaf West's achingly beautiful Broadway production of Spring Awakening). There's something about sign language that's so beautifully expressive, adding another layer of meaning to the words and music (and now I can add "dear world" to "I don't do sadness" in my limited ASL vocabulary).


In typical Ten Thousand Things fashion, the show is presented in a small and fully lit room with just a few rows of chairs delineating the square "stage" space. This allows the focus to be squarely on the marvelous and playful performances of the cast. The set pieces are minimal but effective, and the versatile quick-change costumes help to instantly create the characters (set design by Stephen Mohring, costume design by Moria Sine Clinton).