"Lullaby" by Theater Latte Da at the Ritz Theater 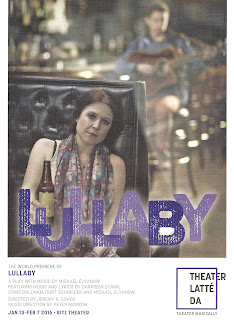 2015 was my 5th full year as a Twin Cities Theater Blogger, and I saw a record high 200+ shows. When I look at those numbers, or at my busy schedule, I sometimes think, why do I do this? Why do I devote all of my free time to this part-time job for which I don't get paid? And then I see a show that reminds me why I do this. That reminds me why I started going to theater, why I started writing about theater, why I think theater (and specifically music-theater) is the most beautiful and powerful art form we have. Lullaby is one such show. This new original play-with-music is everything I want music-theater to be: funny, smart, relevant, relatable, moving, poignant, with awesome songs and a brilliant cast and creative team pouring their heart and souls into the work. This is the first of 20 new works of "theater musically" that Theater Latte Da has committed to developing by 2020 in a project they're calling "Next 20/20.*" It's an exciting thing to create the future of music-theater, and Lullaby has set the bar high for this project.

There are so many stories told in Lullaby it's hard to believe it's only about 90 minutes long. Stories of friendship, marriage, family, addiction, depression, and the power of music to heal. It's about people who meet each other when they need each other most. Cassie asks Thea to teach her to play the guitar so she can sing to her son, but there are deeper reasons why she needs the music. Thea is stuck in a relationship she's trying to get out of. Cassie's father Gabriel is so busy taking care of his daughter and his alcoholic wife that he doesn't take time for himself. Cassie's husband Craig struggles with depression, unable to get out of the hole he's crawled into. All of these people come together with difficult, messy, real relationships. Through it all, music is there to help them express their emotions, connect with each other, and heal, in the way that only music can.

Michael Elyanow has written a beautiful play that's beautifully directed by his husband Jeremy B. Cohen. The seeds of the play were planted when singing to their young son to sleep ten years ago, and the personal connection to the subject matter shows. They've chosen the perfect cast of four actors, all of whom are just fantastic in the roles and so connected to their characters. Adelin Phelps returns from last year's NEXT workshop to inhabit the role of Cassie with much heart and raw vulnerability (and Cassie is lying when she says she can't sing, Adelin has a lovely voice). Annie Enneking** is, quite literally, a rock star as Thea (in her spare time when not acting and fight choreographing for every theater in town, she headlines the band Annie and the Bang Bang) and is so fierce and funny. James Eckhouse*** is a natural as the supportive dad (a role he has experience in, having played the Minnesota Walsh twins' father in Beverly Hills 90210, my fellow early '90s teenagers can geek out now). Last but certainly not least is the continually more impressive David Darrow. Having just composed a beautiful score for 7th House Theater's The Great Work, he returns to the stage as this damaged soul Craig, equally expressive in his acting, singing, and guitar-playing. This small ensemble really gels and feels like a true family.

Lullaby is a play with music, not a traditional musical, because the characters sing in context rather than breaking out into song in the middle of a conversation. Thea sings at her bar, Craig sings around the house to his family. The seven songs in the show are of a sort of folk-rock style, and were written by four different songwriters. Four people writing a score could be a mess, but in this case it works. Five songs come from L.A. based singer/songwriters Chris Dallman and Garrison Starr, and the playwright contributed the other two. Even though most of these songs were not written for this play, they all fit organically into the story and sound authentic to the characters. The only instrumental accompaniment is Annie and David on acoustic guitar, and the actors are blissfully unmiked! The character of Thea sings into a mic at the bar, which makes sense and gives it more of a rocker vibe, but the other songs are sung with no amplification, something I love to hear in music-theater.

Walking into the Ritz Theater you can't help but me struck by the set. As in past Latte Da shows at the Ritz, there are no walls around the stage, which allows for a big open space. Scenic Designer Geoffrey Curly has filled this space with a very real and comfortable home (including kitchen, living room, huge bookcase, and stairs), and a bar area hung with artwork taking up one-third of the stage, with characters seamlessly transitioning between the two areas.

Lullaby continues through February 7. If I haven't already convinced you that you need to see this beautiful, poignant, funny new work of music-theater, I'm not sure what else I can say. It's a must-see (and bring tissues).

*Theater Latte Da is presenting their 2nd new work this season with Bradley Greenwald and Robert Elhai's musical adaptation of Cyrano de Bergerac, C., this spring.
**Read my BWW colleague Kristen's interview with Annie here.
***James Eckhouse's appearance in this play is not as random as it seems. Although based in L.A., his wife, Sheila Kiliher Walsh, is currently a playwright at the Playwright's Center, where Jeremy B. Cohen is Artistic Director.