"The Best Little Whorehouse in Texas" at Artistry 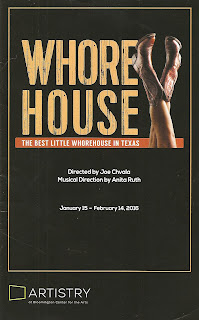 In one of those strange local theater programming coincidences, I have seen The Best Little Whorehouse in Texas twice in the last year, after never having seen it before in my life. But I enjoyed the charmingly corny show at the Old Log last summer, so I was happy to give it another go as part of the former Bloomington Civic Theatre's first season as Artistry. I think I like it even more the second time around! First of all - it's a whole lot of fun (whorehouse + '70s + Texas = fun). But if you look a bit deeper, you'll see some prescient themes in this 1978 Broadway hit about the influence of TV and the media to ignite hysteria, as well as the power of women over their lives and their bodies, or lack thereof. If you're not convinced yet, let me give you a few more reasons to see this show.

But first, a brief plot summary* for those unfamiliar with the stage musical or the 1982 movie starring Dolly Parton and Burt Reynolds. The title pretty much tells you what this show is about. But you may not know that it's based on the story of a real life Texas brothel known as the Chicken Ranch (during the Depression the Madam would accept chickens as payment) that was largely tolerated by law enforcement and government until a TV reporter investigated and demanded it be shut down. In the musical version, Miss Mona runs the Ranch with a strict set of rules and presides over her girls, most of whom seem happy to be there, although some have dreams of a better life. Ed Earl is the sheriff and her sometimes beau, and is torn when given orders to shut the Ranch down after it's exposed by the TV star reporter Melvin Thorpe. It's a sad ending as the girls all move on, but there's plenty of fun to be had before that with cheerleaders, football players, and a general hoedown atmosphere.

Ten reasons to see The Best Little Whorehouse in Texas:

There you have it - ten reasons to head south to Bloomington between now and February 14 to see The Best Little Whorehouse in Texas.

*I borrowed this plot summary from my post about the Old Log's production of the show.