"Best Little Whorehouse in Texas" at the Old Log Theatre 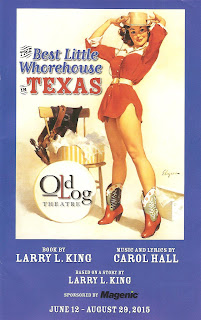 Having opened in 1940, The Old Log Theatre is the oldest theater in Minnesota. But it's also a long drive out to Excelsior, so I don't get there as often as I'd like. They've stepped up their game in the last few years, pulling in top area talent, adding a new restaurant, and remodeling the lobby. There were a number of shows this season I wanted to see, but just wasn't able to work the 70-mile round trip into my busy theater schedule. So I was happy that I finally made it out there this weekend for their fun and energetic production of the charmingly corny 1978 Broadway musical The Best Little Whorehouse in Texas (later made into a movie starring Dolly Parton* and Burt Reynolds).

The title pretty much tells you what this show is about. But you may not know that it's based on the story of a real life Texas brothel known as the Chicken Ranch (during the Depression the Madam would accept chickens as payment) that was largely tolerated by law enforcement and government until a TV reporter investigated and demanded it be shut down. In the musical version, Miss Mona (a strong performance by Julia Cook) runs the Ranch with a strict set of rules and presides over her girls, most of whom seem happy to be there, although some have dreams of a better life. Ed Earl (an excellent Jefferson Slinkard) is the sheriff and her sometimes beau, and is torn when given orders to shut the Ranch down after it's exposed by the TV star reporter Melvin Thorpe (a very funny Jon Andrew Hegge in a Colonel Sanders wig). It's a sad ending as the girls all move on, but there's plenty of fun to be had before that with cheerleaders, football players, and a general hoedown atmosphere.

This is one of those musicals where many supporting characters get one song, and everyone in the large and talented cast steps up. Highlights include Whitney Rhodes as Jewel singing "Twenty-Four Hours of Lovin'," Maisie Twesme's lovely "Doatsy Mae," Britta Ollman and the girls singing my favorite song in the show, the poignant "Hard Candy Christmas," and John Paul Gamoke's brief but memorable appearance as the Governor in the hilarious and all too true song "The Sidestep." All of the songs have a twangy Country-Western sound (which I happen to love, as I did the great old Country songs played before the show and during intermission). John Lynn directs the band behind a screen at the back of the stage.

With Regina Peluso as the choreographer you know there are going to be some fantastic dance numbers, especially with several members of her company (Collide Theatrical Dance Company) in the ensemble. The group numbers are lots of fun and well performed by the cast. As you would expect of a musical set in a whorehouse, there is a bevy of scantily clad women, but the boys have a shirtless singing and dancing number, which is only fair. ;) Sara Wilcox's costume design takes advantage of the '70s era (I love a jumpsuit!) and gives each character a distinct personality.

The Texas accents are so much fun to listen to. I don't know how accurate they are to reality, but they sound like the Southern accents you hear on TV (in fact the entire show is almost like an episode of Dukes of Hazzard). Greg Eiden is especially good at it in his dual roles as a senator and a diner patron, milking every line for laughs, and getting them.

If you live in the East metro like I do, Excelsior is a bit of a hike, but it's worth it to see the work that Old Log is doing, and this fun summer musical in particular. I recommend heading over to the charming lake town in the afternoon to avoid traffic (if such a thing is possible in this busy summer construction season), checking out the shops or sitting by the lake, and dining at one of the many area restaurants (I had yummy vegetarian sushi at Yumi's Sushi Bar) before seeing the show. It's a great idea for a staycation and checking out another beautiful part of the Twin Cities metro area.

The Old Log has an interesting line-up for next season, and I'm particularly excited that they're producing the regional premiere of the smart, funny, poignant two-person play The Velocity of Autumn, which I saw last year during it's too-short Broadway run. Starring Melissa Hart as a 79-year-old woman who has barricaded herself in her Brooklyn home and Paul de Cordova as her son who climbs in the window to try to talk her down, it's definitely going to be worth the drive.


*I was seriously derailed in writing this blog when I went down a black whole of Dolly Parton youtube videos, starting with "Hard Candy Christmas" and ending with the best country duet of all time, "Islands in the Stream."