"Sweet Land" at the Lundstrum Center for Performing Arts 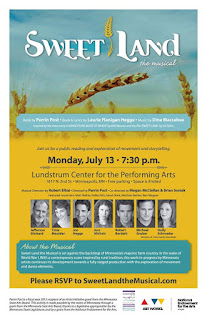 I've been following the progress of the new musical Sweet Land, based on the Minnesota made movie of the same name, since the first reading I attended last spring.* If you've seen the movie, you know what a beautiful, sweet, funny, simple, honest story this is. Creators Perrin Post (book), Laurie Flanigan Hegge (book and lyrics), and Dina Maccabee (music) have done a wonderful job adapting Sweet Land and retaining that wistful, nostalgic, romantic tone, only enhancing it with the addition of music. But their work isn't done yet. With an Artist Initiative grant from the MN State Arts Board, they've continued to develop the work in recent months, culminating in a week-long workshop with actors and musicians and a public staged reading. Songs have been cut and added, but perhaps the biggest change is the addition of movement, created by my favorite local dancing pair Megan McClellan and Brian Sostek. Another addition is orchestration and music direction by Robert Elhai (who was nominated for a Tony for a little show called The Lion King). The reading was very much a work in progress (they would occasionally stop, explain, and set up the next segment), but it's quite obvious even at this phase that this musical is a unique and special gem. I cannot wait until it is polished into a full production that I'm certain will be thrilling!

If you've never seen the 2005 movie Sweet Land, you should go directly to Netflix or Blockbuster or however you get your movies and watch it! Filmed near Montevideo, MN and including cameos by local actors (including the Stephens D'Ambrose, Pelinski, and Yoakam), it's the quintessential Minnesota story of Norwegian and German immigrants forging a life on the farm, with all the difficulties and rewards that entails. In this particular story, Norwegian immigrant Olaf Torvik needs a wife, so his family in Norway send him one. When Inge arrives, Olaf is surprised to find out that she is actually German, which is not well accepted by the community so soon after WWI - Germans are the enemy and she could could be a spy. The pastor refuses to marry the couple, and Inge is forced to stay at the neighbors farm with Frandsen, his wife Brownie, and their many children. It doesn't take long for Inge to get fed up with this crowded living arrangement and long for a space of her own, so she makes her way across the field to Olaf's farm and take up residence there, helping him with the farm. Despite the fact that Olaf sleeps in the barn, this arrangement is frowned upon and the couple is shunned by the community, until their hard work, perseverance, and generosity slowly win everyone over. They are accepted and allowed to live their life together as man and wife and an important part of the community.

The creators of the musical have stayed true to the plot of the movie, with many of my favorite moments and lines represented, or better yet - turned into song. The good-natured Frandsen calls Inge "ducky" and she doesn't quite understand, which has been turned into a fun light-hearted song. At the end of the movie, after living and working together for so long, Inge declares that she and Olaf are already married without any ceremony or legal documents necessary, which has become a beautifully moving ballad. The moment when Olaf first really looks at Inge through the camera lens, the auction, Olaf's declaration that "farming and banking don't mix," the threshing scenes, Inge's rebellious bath, all of these are songs. They really did take all of the best and most memorable moments in the movie and turn them into songs, which is really the best way to make a musical.

The music is all wonderfully Americana, with a couple of guitars, a fiddle, an upright bass, and an accordion in the band. In this year's reading, they moved closer to the intention for the full production, with band members doubling as ensemble members, playing some of the smaller roles and joining in on the singing. This is similar to the new musical Once, also an adaptation of a sweet and simple but lovely movie, in which the musicians are also the ensemble; perhaps this multiple Tony winner has defined and allowed for a new type of musical. A musical like this one in which there is no differentiation between actor, singer, and musician, with a style of music that strays far from "Broadway" into territories of folk, country, and Americana.

Much of last year's cast returns, with a few changes/additions in the 7-person cast and 5-person band (who are really also part of the cast). Ann Michels is once again the perfect Inge (and in fact is the muse for this piece), with the spark and strength and humor of the character, while also showing her vulnerable longing side. Robert Berdahl returns as her Olaf, a typical Norwegian farmer hiding his feelings deep down inside but allowing them to come to the surface at pivotal moments. Tinia Moulder once again brings heart and humor to the role of Brownie, this time with Jon Andrew Hegge as comic relief Frandsen. New ensemble members include Michael Gruber, Holly Schroeder, and Jefferson Slinkard, and doing double duty as band and ensemble were Matt Riehle, Kellie Rae Nitz, Mathias Becker, Ben Wagner, and Sarah Burk. (It should be noted that these busy performers took time off of their "day job" to do this - Ann is in the middle of a many months long run as the Chan's Mary Poppins, Robert, Tinia, and Michael are in the Guthrie's scrumptious production of The Music Man, and Jon, Jefferson, and Mathias can be seen at the Old Log in Best Little Whorehouse in Texas).

Some of the scenes in this year's reading included movement, with minimal and efficiently used props consisting of suitcases, trunks, old chairs, and a child's wagon. Highlights of these scenes include the baseball/church social/dance scene, which very specifically created the world of the play, and a small taste of the church/threshing scene that only whet the appetite for more. At the end, Brian and Megan also presented an option for the opening of Act II, in which Olaf and Inge wordlessly become closer through shared living and working. This piece is so rich, with so much potential, it's just a matter of figuring out the best way to tell this lovely little story. And I have faith that they will do so.

Sweet Land is such a special little movie, a small story but one that's so moving and timeless and beautiful. It's a piece of our history as Minnesotans, one that I, as a descendant of German immigrant farmers, feel a special connection to. The musical is everything I hoped it would be, retaining what was so special about the movie and its wistful, funny, romantic tone, and only adding to it with the wonderful new original music of the Americana style that I love so well. I am confident we will see a full production, hopefully in the not too distant future. Visit the Sweet Land musical website or become a fan of their Facebook page for more information about the piece, future productions, and how you can help with the next phase of development.


*Much of this post is copied from what I wrote about last year's reading.