"Kinky Boots" at the Orpheum Theatre 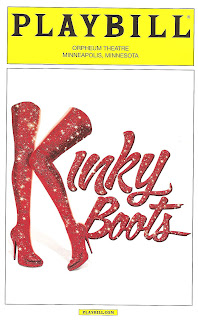 There's something about putting on a beautiful, well-made pair of high heels that makes me feel stronger, more confident, even happier, helping me to literally and figuratively walk taller in the world. But women aren't the only ones who get to experience this pleasure. For drag queens I imagine it's an even greater transformation - donning heels, wigs, make-up, and dresses to create a new persona that perhaps feels more natural than the one society expects of them. The 2013 Tony-winning musical Kinky Boots celebrates this love of shoes and self-identity in a glorious, fun, warm-hearted way. But of course it's about more than just shoes (even if they are "the most beautiful thing in the world"). As with most musicals there's a love story at its core, but this time the love story is a friendship between two very different men who grow to admire and respect each other, encouraging each other to live up to their full potential. With this great story (based on a 2005 movie that was based on a true story) adapted to the stage by Broadway legend Harvey Fierstein with music by music legend Cyndi Lauper, it's a surefire hit!

In this fictionalized version of the true story, Charlie inherits his father's shoe factory in Northampton England. The business is in trouble and Charlie is faced with the prospect of firing his friends and neighbors, until he gets a brilliant idea. Through a chance encounter with a drag queen named Lola, he discovers a niche market - high-heeled boots for men. He convinces Lola to help him design the line and make samples for an upcoming fashion show in Milan. Like any good love story, the two share their deepest feelings (bonding over not living up to their fathers' expectations), have fun together (dancing, singing, and creating beautiful shoes), and argue (Charlie feels the pressure of the business and lashes out at Lola's choices), only to resolve their differences just in time to save the day. It's a beautiful, uplifting, fun story.

One might think it's a given that the woman who gave us "Girls Just Wanna Have Fun" and "Time After Time" could write a Tony-winning score. But not all successful pop musicians can write a successful Broadway musical (cough-Spiderman-cough). It's a different beast. But Cyndi Lauper has the musical, lyrical, and emotional chops to write for musical theater, as evidence by this fantastic pop-rock score with fun singable anthems and beautiful ballads. I just downloaded the cast recording, and it's sure to become my top-down summer soundtrack. "Everybody say yeah!"

The cast of this first national tour is quite fantastic. It's a difficult task to step into the high-heeled boots of Billy Porter (who won a Tony for his performance and is still in the show on Broadway after a few brief hiatuses). But never having seen Billy's performance, I can say that in this show, Lola is completely Kyle Taylor Parker's role. He displays incredible vocal and emotional range, playing the over-the-top drag queen, the modest and unsure man behind her, and everything in between. He looks  and sounds gorgeous, whether in men's or women's clothes. Completing this sweet bromance is Steven Booth as Charlie, a charming boy next door (if you live in Northampton) who also sings the heck out of these songs. Standouts in the ensemble are, of course, the six beautiful Angels supporting Lola, and Lauren Nicole Chapman as a factory worker with a crush on Charlie, whose "The History of Wrong Guys" is a crowd-pleaser.

I've never seen anyone dance on a conveyor belt before, but the cast of Kinky Boots does, and it's amazing. It's so much fun to watch, and this, along with the fabulous drag numbers and a slow-mo fight scene, is the reason director/choreographer Jerry Mitchell won a Tony for his choreography.

A musical about shoes, drag queens, and blue collar workers in England, with a heart-warming story and a fantastic pop-rock score. What's not to love? Playing through this weekend at Hennepin Theatre Trust's Orpheum Theatre.