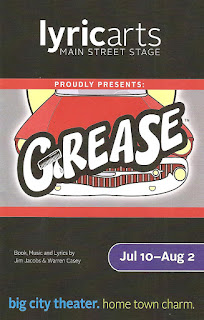 I love the 1978 movie Grease - '50s nostalgia, an adorable pre-Scientology John Travolta, the golden voice of Olivia Newton-John, and an endlessly singable soundtrack. It's the perfect fun and mindless movie musical. But the 1971 stage musical on which it was based is something different. Wikipedia says "In its original production in Chicago, Grease was a raunchy, raw, aggressive, vulgar show. Subsequent productions sanitized it and toned it down." With their new production, Lyric Arts and director Christine Karki move closer to the original concept than the movie it ended up becoming. It's a little darker and less bubble gum look at teenagers in the '50s. The fantastic young cast breathes new life into these familiar characters to create a Grease that's still great summer fun, but with a little more weight.

On a set that looks more West Side Story than Grease, the lives of these teenagers unfold on the gritty streets of Chicago as they deal with relationships, friendships, pregnancy, gangs, and school dances. The cast is mostly made up of high school and college kids, or recent graduates, which brings some very believable teen angst and youthful energy to the show. Jordan Oxborough is a natural as Danny, with the slicked back dark hair, pretty falsetto, and charm that all the ladies fall for. With her performance as Sandy, Megan Fischer proves that little Annie is all grown up. She's sweet and naive but with an underlying feistiness. And the two of them sound gorgeous together on the Danny/Sandy duets (just don't expect to hear "You're the One That I Want," written for the movie). Jill Iverson is a standout as Rizzo - tough on the outside and tender on the inside - and her beautifully nuanced rendition of "There are Worse Things I Could Do" is a definite highlight (she's excelled at playing misunderstood teens before). As the mooning Roger and constantly eating Jan, Michael Conroy and Christine Walth are adorable and funny. And Lucas John Beach sings "Beauty School Dropout" like an angel.

Of course Grease isn't Grease without the car called Greased Lightning, and this version is a pretty cute little car that actually drives around the stage and threatens to upstage the actors. The cast makes good use of the multi-level set (with the onstage band sitting upstairs), hanging off the stairs and climbing around (set by Brian J. Proball). Samantha Kuhn Staneart's '50s period costumes are, like the rest of the production, less pretty and more realistic, expressing the distinct personality of each character.

The ending of the movie has always bothered me, in which Sandy changes who she is in order to "win" Danny. But this feels less like that and more like a young woman who's growing up and trying to figure out who she is and what she wants. It's a more believable transition.

While it doesn't top last year's summer hit RENT (nothing ever could in this RENThead's opinion), Grease is another fun and edgy summer musical at Lyric Arts Main Street Stage in Anoka. Due to popular demand, it has been extended through August 9 but the additional shows will sell out fast if they haven't already, so make plans soon.