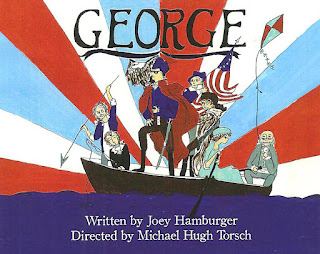 Grilled cheese, fries, a beer, and zany, topical, funny, original theater. Is there a better way to celebrate the independence of this great nation? Our foremothers and fathers fought the British and won our freedom 239 years ago so that someday, their story could be told in a light-hearted and irreverent way in front of an audience enjoying good food and drinks. I'm joking of course, but in all seriousness one of the great things about this country is that we can freely make fun of ourselves and use theater and art to entertain and make commentary. George does exactly that and makes for a fun and festive night out.

I had been in Bedlam Theatre's newish space, the restaurant/bar/performance space known as Bedlam Lowertown (located in St. Paul's Lowertown neighborhood, obviously), but this was my first time actually seeing a show there. It's a similar idea to the Bryant Lake Bowl, with full menu and bar service before, during, and after the show, except that the layout is a little more friendly and its primary focus is theater. The menu's interesting, the beer selection is good, and it's kind of fun to eat while watching a show, although I did feel a little awkward chomping my fries a few feet away from the actors doing their thing (note: this is an exception to my no eating at the theater rule). After the show a musician took the stage, and with events happening just about every night, this is definitely a place you should check out.

On to the show. Written by Joey Hamburger and directed by Michael Hugh Torsch, both of whom also appear in the show, George tells the story of Independence Day in a slightly, well, different way. Part Bloody Bloody Andrew Jackson (it's not a musical, but there is music accompaniment by John Hilsen), part Weekend at Bernie's, part Drunk History, it reimagines George Washington (played by the playwright with a bit of Andy Samberg zaniness) as a hapless, clueless, but good-natured fellow. When an accident caused by his two "squires" Thomas Jefferson (Michael Rogers) and John Hancock (Kevin Callaghan) leaves him dead, they prop him up and carry on the business of wooing heiress Liberty Freedombell (Laura Hickey) and defeating King George (Patrick Latterell, pompous and spoiled), hoping that an electrical trick they learned from Benjamin Franklin (a scene-stealing Jacob Mobley) will bring him back to life.

George is funny, clever, and irreverent, with jokes about the many things America is best at (giving speeches, celebrating) and how it's OK to lie if it's for the good of the country (which seems to be the motto of most politicians and the entire cast of Scandal). Unfortunately the short run concludes this Friday, so go soon if you're going! You can also catch this writer/director team at the Fringe, and keep your eye on the Bedlam Lowertown website for future events